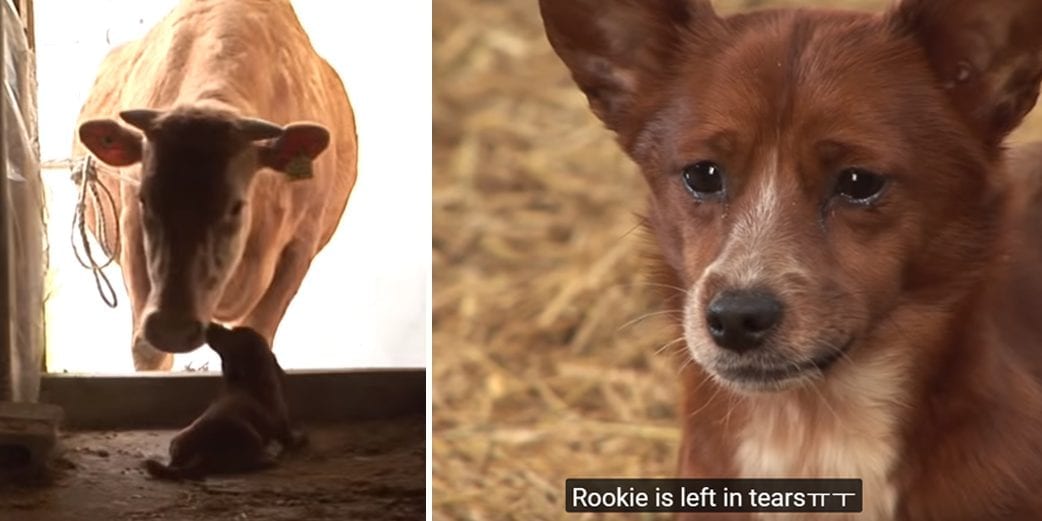 For anyone doubting how deep and complex non-human animals’ emotions are – look no further than the story of orphaned dog Rookie and his adoptive mother cow.

The little pup was inseparable from a large cow who lived in his owner’s barn – he would spend all day with his makeshift mother, climbing on her back, playing with her tail and even sleeping on her back.

And the beautiful brown cow returned the love, licking Rookie clean and nuzzling his body to show deep affection for him.

But she was owned by a small farm with one other cow, and both were due to be sold as they were the family’s main source of income.

However, the owner revealed he became very attached to the cows, and could only bear to part with one of them. Sadly for Rookie – the chosen cow was his mother.

But when the time for Rookie to be separated from his closest companion, he was immediately distraught. The heartbroken pup realised she had been taken from her barn, and he chased after her, howling and moaning. The grieving dog was so overcome with emotions, tears even gathered in his eyes and he appeared to cry.

But the separation was initially short lived. A documentary shows Rookie’s reaction when one day he hears the mother cow’s calls and immediately knows who it is. He bounds down the street, with his owner chasing after him, to be reunited at last.

Rookie found her at another nearby barn and the overexcited dog began yelping, jumping and licking her face, but sadly the owner swiftly took him back home and away from his mother.

The reunion just increased Rookie’s anxiety and depression. He wandered around the cow’s former enclosure aimlessly, lost his sparky energy and even began refusing food. His owners feared he would waste away.

Eventually they were so touched by his deep connection with the cow they couldn’t bear to keep them apart, so the owners decided to buy the cow and reunite the pair once again, despite the financial difficulties it caused.

The story of Rookie and his mother cow is a beautiful example of how similar animals’ emotions are to humans. It proves they have deep, complex feelings and relationships, and should be treated with love and dignity. See the full story in the video below.

Share this story to show the world that animals are friends, not food.