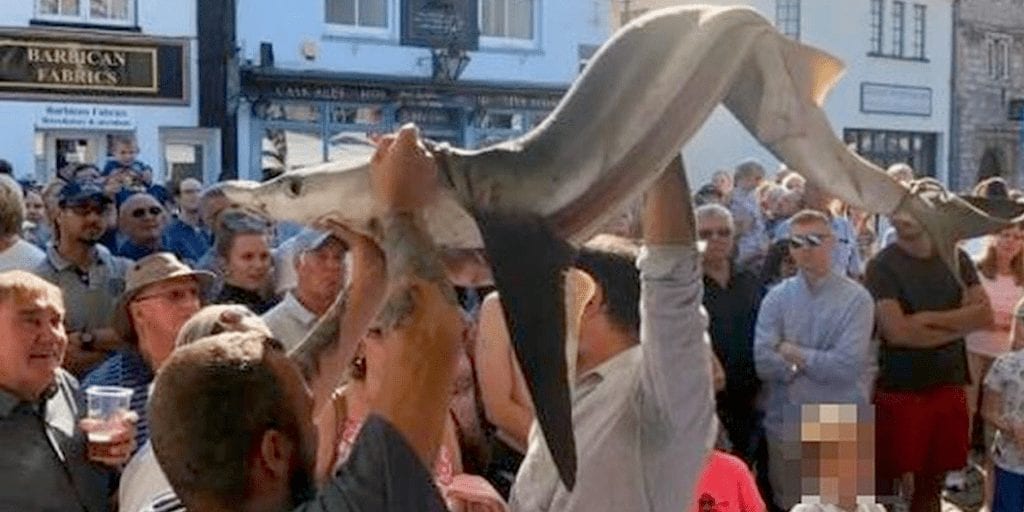 Conservationists have reacted with fury after an endangered blue shark was paraded through a food festival before being cooked and eaten in Plymouth, UK.

The shocking incident was posted on tourist board Visit Plymouth’s Instagram page before being removed.

For many years environmentalists have been calling for stronger protections for the blue sharks, which are technically classed as ‘near-threatened’.

The Ocean Conservation Trust led condemnation. “As an Ocean conservation charity, we do not condone the eating blue shark and were disappointed to see that a blue shark was shown off at the ‘catch of the day’ session, as well as being featured on the chef’s stage,” Helen Gowans, the charity’s public and community engagement manager, said in a statement.

The organisers of the Plymouth Seafood Festival said they were ‘surprised and disappointed’ by the incident.

In the Instagram post, two men are shown carrying the shark through the streets of Plymouth, and it was later cooked and chunks of its meat were handed out to the public.

The caption read: “We have a blue shark here today. Ben will be cooking it later on this evening.”

The local council explained restaurant The Boathouse had taken over its social media platforms for the day.

According to Plymouth Live, which has attempted to contact the owner, the fish was caught as an accidental ‘bycatch’ of a commercial fishing trip targeting other fish.

Members of the public reacted to the post with fury.

“In a time and city where we are encouraged to help with the protection and conservation of sharks many people think this is just terrible, especially with shark numbers dwindling,” one local said.

“Totally out of order, killed and paraded. I thought these days were over,” another added.

Does the public fully understand the true nature of commercial fishing? Share your thoughts in the comments section below!