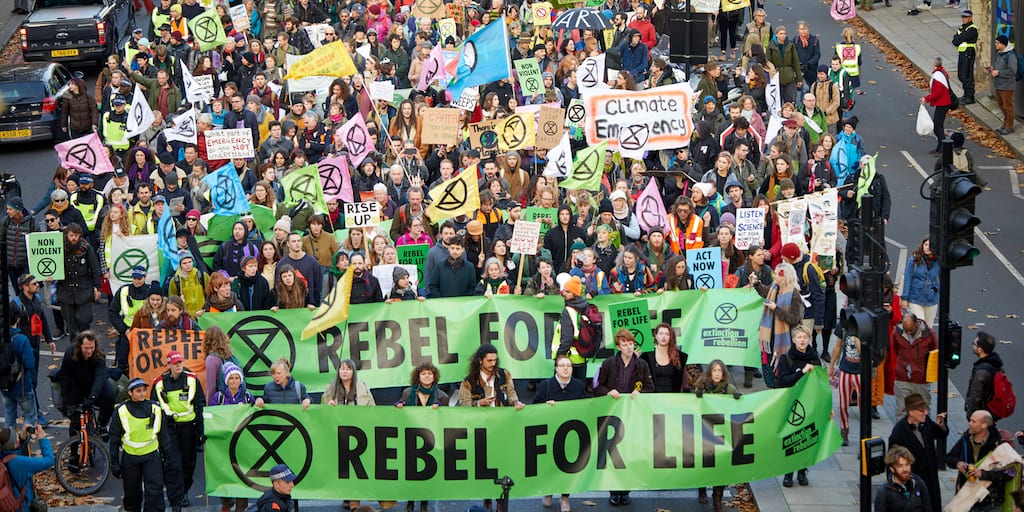 The documents seen and reported by The Guardian make up part of the Prevent- an anti-radicalisation programme, introduced to help police officers, government organisations, teachers and  youth workers to identify and report signs of extreme ideologies or fascism.

XR was included alongside other national security threat groups such as neo-Nazi and pro-terrorist outfits with an entire page dedicated to activities conducted by the protest group.

Explaining why XR made the list, the guide read:  “Anti-establishment philosophy that seeks system change underlies its activism; the group attracts to its events school-age children and adults unlikely to be aware of this. While non-violent against persons, the campaign encourages other law-breaking activities.”

It added: “While concern about climate change is not in itself extreme, activists may encourage vulnerable people to perform acts of violence, or commit such acts themselves.”

According to the police, XR’s demonstrations have cost tens of millions of pounds, diverted officers from fighting crime and inconvenienced law-abiding citizens.

The XR disclosure sparked a huge uproar with many voicing their disapproval because Extinction Rebellion’s protests have always been convicted for disruption, never destruction.

Its nonviolent civil disobedience has only been “in an attempt to halt mass extinction and minimise the risk of social collapse”.

“How dare they? Children up and down the country are desperately fighting for a future. Teachers, grandparents, nurses have been trying their best with loving nonviolence to get politicians and big business to do something about the dire state of our planet. And this is how the establishment responds,” exclaimed an XR spokesperson.

“In a world of misinformation, where lies travel faster than the truth, we can’t help but wonder was this a deliberate attempt to silence a legitimate cause. Wouldn’t it be nice if they focused on the real extremists, the fossil fuel companies and those that do their bidding?”

Clare Collier of the civil rights group Liberty said: “This is a startling example of how Prevent stifles free speech, labels dissent as dangerous and gives the police sweeping powers to monitor non-violent, non-criminal behaviour. The definition of extremism under Prevent is fundamentally flawed and so wide that thousands – including children – are swept up by it.

“Protest is fundamental to democracy and our ability to stand up to power. This year alone Extinction Rebellion, the school strikes and other protests have shown how valuable protest is for bringing about change. We corrode the right to protest at our peril.”

Andrew Smith of Campaign Against Arms Trade added: “The message that this appalling list sends is that if you care about social justice or oppose war, arms sales, discrimination or conflict then you can be included alongside white nationalists and neo-Nazi hate groups.

The listing has been attributed as an error by the south-east police department of England rather than a decision at the national level and efforts have been made to correct the damage.

CTPSE initially said: “This document was produced at a local level to help our partners to spot the signs of vulnerability to radicalisation. By including Extinction Rebellion in this document, it gives the impression we consider them to be an extremist group, which they are not. We will review the guidance to make this clear.”

Later, DCS Kath Barnes, head of CTPSE, said: “ The inclusion of Extinction Rebellion in this document was an error of judgment and we will now be reviewing all of the contents as a result.

“It was produced by CTPSE to assist our statutory partners – including police forces and government organisations – in identifying people who may be vulnerable as a result of their links to some organisations.”

“The document was designed for a very specific audience who understand the complexities of the safeguarding environment we work within and who have statutory duties under Prevent. We are in the process of confirming who it has been shared with and recalling it.

“We as Counter Terrorism Policing, along with our partners, have a responsibility to protect vulnerable people. Officers are trained to spot those who may be vulnerable, and the membership of an organisation that supports environmental or animal welfare issues alone would not be a trigger.”

Have you ever been pulled up by law for participating in a social cause? Share your thoughts in the comments below!