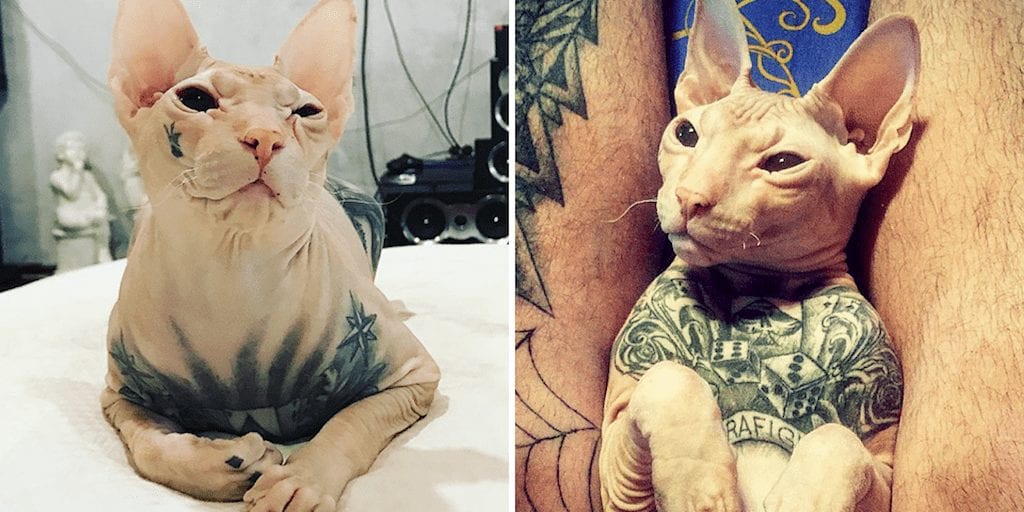 A Ukrainian man has faced fierce criticism after pictures of his heavily tattooed cat surfaced online.

Mr Shafiev, 35, posted pictures of his six-year-old cat who is covered in what appear to be gang tattoos across his face, back and chest.

The owner was appealing for help after his pet jumped out of the car window and ran off into the night near Yekaterinburg, but his cries for help have been met with condemnation for his treatment of the cat.

The owner expressed his fear about the safety of his pet Bes, since the area is inhabited by brown bears, wolves, wolverines, sable and lynx.

Mr Shafiev said: “He jumped out of the window, disappeared into the darkness and tall grass.

“I searched for it myself everywhere, I called for the cat, it was useless. I’m very worried. I’m not eating, not sleeping.”

But animal welfare activists are livid with Mr Shafiev, and have lambasted him on social media for tattooing his cat and subjecting it to a painful procedure.

Animal rights campaigner Elizaveta Skorynina said in a statement: “A person can choose to endure the pain in order to wear this ‘beauty’ later on in life, but the animal is not given the right to choose.

“This is purely desire of the owner. It is impossible to guess what pain threshold a cat finds impossible.

“Under general anaesthetic an animal can suffer side effects. Using ‘muscle relaxants’, the pet does not move but at the same time it feels and understands everything.

“I see nothing positive in such an experience.”

Another activist added: “For a cat, this procedure is painful, comparable to a burn.”

Should there be punishments for owners who treat their pets in this way? Share your thoughts in the comments section below!