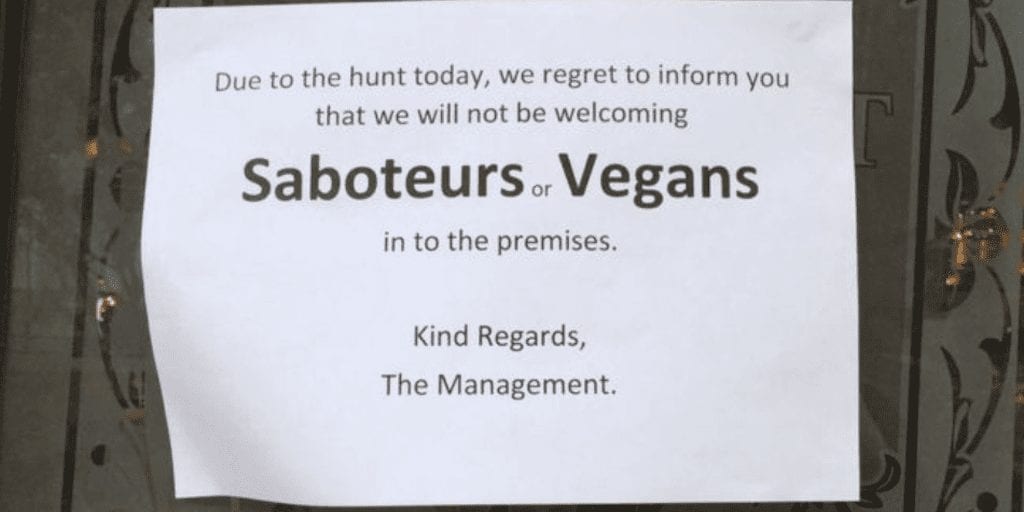 A brewery has suspended an employee at one of its pubs after the venue banned vegans during a Boxing Day Hunt.

The Dorset in Lewes, UK, faced outrage over a sign featured on its doors reading ‘due to the hunt today, we regret to inform you that we will not be welcoming saboteurs or vegans into the premises. King regards, the management’.

Brewery Harvey’s, which owns the pub, suspended an employee and said the company was ‘appalled’ by the sign.

There were angry confrontations and fights throughout the town during protests against fox hunting on Boxing Day, and police were called to the many ugly scenes.

Gilly Smith accused the pub of discrimination on Twitter: “Isolating and discriminating against their own customers? Really clever marketing ploy. Should be ashamed of themselves and boycotted.”

The pub, which has a vegan option on its menu, came under intense scrutiny from its management and others on social media.

A spokesman for Harvey’s said: “Following the comments generated by [the] inaccurate, insensitive and inappropriate poster, the company would like to issue a formal apology for any confusion, offence or upset it may have caused.

“Harvey’s do not concur with the sentiment of this sign in any way, and are appalled at the inconsiderate actions of the individual in question… [an] employee has been suspended pending an ongoing investigation.

“Harvey’s are fully committed to the inclusivity of all guests. We… would like to reassure current and future patrons that all are welcome in our establishments. This will not happen again.”