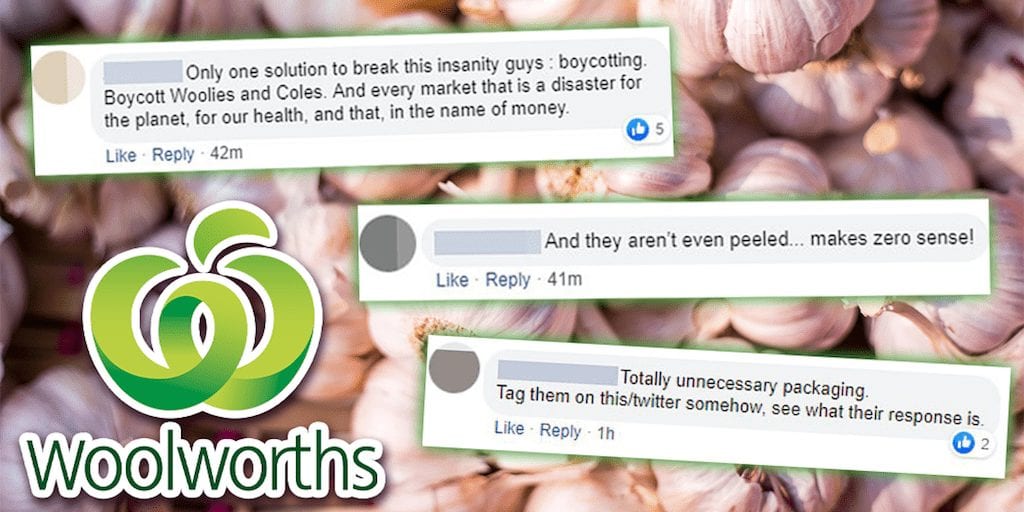 Although Woolworths has taken several measures to reduce plastic waste across its brand’s food products, some customers are miffed after a picture of the brand selling garlic cloves in plastic surfaced online.

A customer buying goods at the Bondi Junction store in Sydney’s eastern suburbs uploaded a photo of Woolworths selling its ‘Odd Bunch’ garlic cloves wrapped in plastic packets on Facebook.

He captioned the photo lambasting the grocery store chain for its seemingly impractical stance on plastic packaging after it had removed disposable plastic bags last year in a bid to reduce plastic waste.

He wrote: “Woolworths sell garlic gloves wrapped in plastic. Garlic comes out of the ground in a bulb that can be cleaned and sold as a unit. Why would Woolies break up the garlic bulb into cloves and then repack them in excessive plastic?”

The picture drew several responses from other customers who were equally irate with the grocery chain.

“There is so much plastic in Woolworths it’s ridiculous, I feel since free plastic carry bags have stopped there seems to be so much more food wrapped in plastic,” read one comment.

Others pointed out that the packaging is ‘ridiculous’, ‘pointless’ and makes ‘zero sense’ as ‘they aren’t even peeled’

A user wrote: “I’m not shopping there til they’re off the shelves.”

“If you think they removed plastic bags to save the environment, you are an idiot. They did it to make money. They don’t care about the environment at all, so of course they will pack anything in plastic,” was another angry shopper’s comment.

Some tried clarifying the situation by stating that the packaged loose cloves were a part of Woollies’ campaign to sell misshapen and detached cloves left behind in the tray.

The supermarket is environmentally conscious and committed to reducing plastic waste. Speaking to Daily Mail Australia, a Woolworths spokesperson said: “Over the last 18 months we’ve removed more than 500 tonnes of unnecessary plastic packaging across our produce and bakery categories.

“We’ve also rolled out REDcycle facilities in stores across the country, which allows customers to return soft plastics including Odd Bunch packaging to our stores to be recycled.

“We know there is much more to do, and we’ll continue to work on our plastic reduction efforts.”

What else can supermarkets do to avoid food wastage and reduce plastic waste? Share your thoughts in the comments section below!