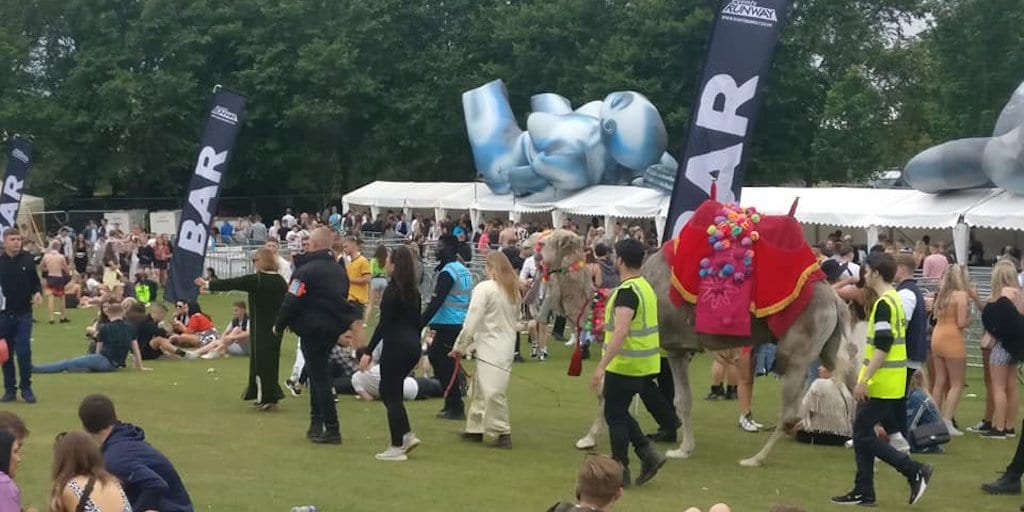 A camel was paraded around Land Beyond Festival in Brighton. Image: soroat6/ Facebook

A woman has given a bizarre defense against animal rights activists who criticised her for bringing a camel to a music festival, claiming the animal is a massive drum and bass fan.

Images of the camel at the Land Beyond Festival were met with outrage on social media, as it was paraded around drunken festival-goers.

Owner Rebecca Fosset runs A J Camels, a company which provides camels for entertainment, with its showpiece camel even featured in the film Aladdin.

Onlookers and social media users accused the company of abuse, fearful that the environment would be frightening for the camel.

But the woman has totally rejected the complaints, and told local newspaper The Argus that ‘so-called animal lovers’ don’t know what they’re talking about.

“Some of the people who complained just have no clue about animals,” she said.

“You do realise camels love drum and bass? They like other music too.

“Have you ever seen camels listen to jazz? They absolutely love it, they react like humans do.

“I was completely shocked at the aggression towards my daughter and we are thinking of taking legal action.

“And I don’t know if people were particularly aggressive at the festival because they were off their faces, but it was ridiculous.

“At no point was he under any stress. He was quite happy sitting and enjoying the music.

“We deliberately put a pen around him to stop festival-goers hugging him too much because that would have stressed him out.

“People just don’t have the same connection to animals these days, they have no idea what they are saying.”

The RSPCA also criticised the woman’s actions. “The RSPCA would have welfare concerns about any animal, including camels, having to appear at a festival. The large crowds of partying people and loud music is likely to be very stressful,” a spokesman said.

But Fosset was unfazed by the concerns. “For years people had horses and camels because they were very much involved in everyday life. It is worrying organisations like the RSPCA are moronic and completely inexperienced,” she added.

A spokesman for Land Beyond Festival told Totally Vegan Buzz that the welfare of the camel was ‘always a priority’.

“We had several discussions with the camel supplier who assured us that they wouldn’t supply a camel for an event like ours if it caused any distress to the animal,” the spokesman explained.

They said the owners are ‘renowned for their outstanding care and specialisation in camels and have the highest standards of training and animal welfare’.

What do you think about the use of camels for entertainment? Share your thoughts in the comments section below!