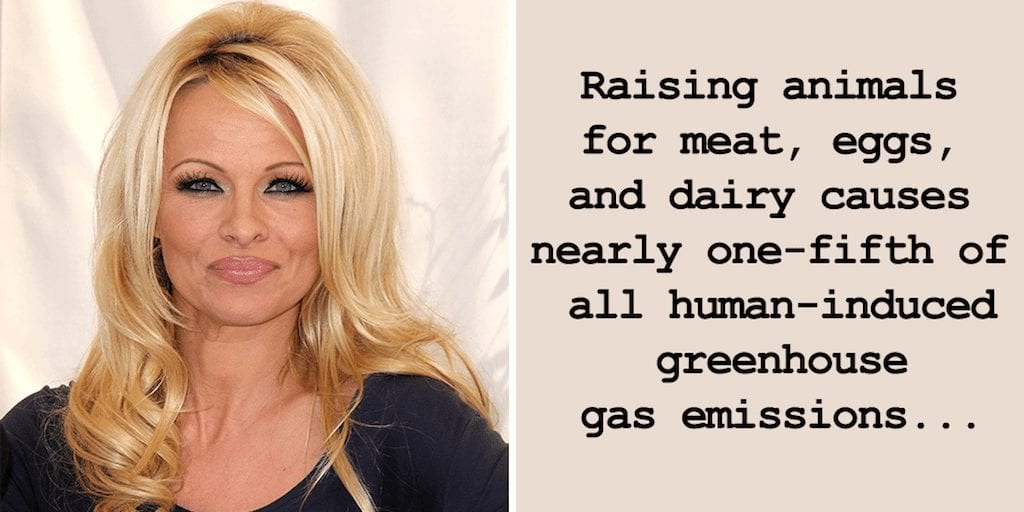 Pamela Anderson has urged the Indian Prime Minister to promote veganism in a bid to fight climate change.

TV Star Pamela Anderson posted an open letter on behalf of People for the Ethical Treatment of Animals (PETA) to Prime Minister Narendra Modi, urging him to ban animal products from all government meetings and functions.

She cited the environmental damage caused by animal agriculture.“ Raising animals for meat, eggs, and dairy causes nearly one-fifth of all human-induced greenhouse-gas emissions, uses one-third of the planet’s freshwater, causes more water pollution than all other industrial sources combined, and dominates one-third of global cropland—an enormous waste of resources.

“With your country’s innovation and agricultural history, I’m sure that India-produced soy and other versatile foods can easily replace these damaging foods,” she mentioned.

She also stressed on the benefits of adopting a plant-based lifestyle in terms of stemming animal torture and reducing prevalence of diseases resulting from meat and dairy consumption, such as diabetes, colon and breast cancer, and heart disease.

In her letter, she empathized with the Indians suffering from the deteriorating air quality in the country’s capital and highlighted the imminent danger of coastal flooding that could destroy up to 36 million Indian lives by 2050.

She also referenced The World Bank report that estimated that at least 21 cities in India were close to zero groundwater levels for the next year and 40% of Indians could end up with no access to water by 2030.

She wrote: “I know you share my concern for the future, so please lead India’s fight against climate change by taking a simple but forceful, progressive step.”

She further urged PM Modi to adopt practices put in place by countries such as New Zealand, China, and Germany stating: “I appeal to you to show that India can equal or best them.”

Pamela has been a vegan since decades and is a passionate animal rights campaigner.

She revealed how she ditched eating meat after seeing her father-a hunter hang a dead headless deer outside their home where it dripped blood into a bucket. “I cried for days. It wasn’t hard for me to give up something so cruel. I got my father to stop hunting, too,” she said in an interview with The Guardian last year.

This has not been the first time Pamela has urged a world leader to adopt vegan practices. Last month, she had written to Canadian Prime Minister Justin Trudeau asking him to turn prisons vegan to save the planet and prevent animal suffering.

How influential can Pamela Anderson’s activism be? Share your thoughts in the comments section below!