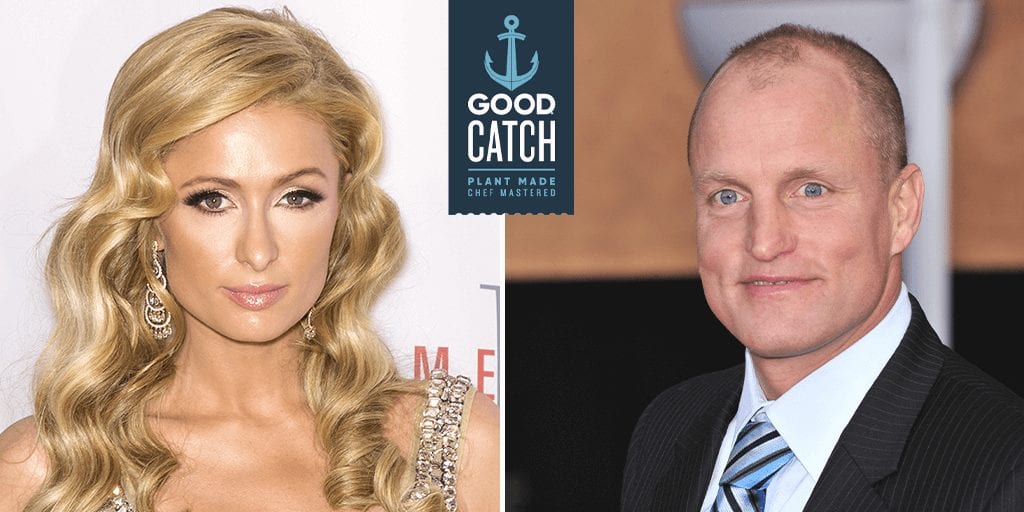 A number of celebrities are showing a keen interest in plant-based startups and are throwing their weight behind these ventures. Latest to join the list are Paris Hilton, Woody Harrelson, Shailene Woodley, and Lance Bass, who are now investors in Gathered Foods, the parent company of Good Catch- a plant-based seafood brand.

The company previously raised $36.8 million in a Series B financing round, and with the additional influx of funds is looking to expand its international distribution and product line.

Good Catch products retail in over 4,500 outlets across the US and the UK.

‘Making a difference for animals and planet’

Good Catch was founded by brothers and culinary ninjas Chad and Derek Sarno as they believe plant-based foods can feed and help save the world.

The brothers are self-processed plant pushers and are pioneers in moving plant-based eating to the mainstream. They ‘ve also co-authored The Wicked Healthy Cookbook and The Whole Foods Cookbook.

“I’ve been living a vegan lifestyle for over 30 years. My diet has been driven by the love I have for the environment,” Harrelson said.

“I have known Chad Sarno for years and am a huge fan of the culinary work Chad and his brother Derek are driving in the market. I’m excited to work with a food brand like Good Catch that leads with taste and aligns with my personal beliefs of making a difference for the animals and our planet.”

Shailene Woodley said: “As an advocate for conservation, our planet and its oceans, I work with organizations around the world to help combat climate change and protect our oceans from pollution. That’s why aligning with Good Catch feels like a natural extension of my continued work.

“They are a like-minded brand that is doing their part to have a positive impact on our oceans and our planet, all while creating delicious plant-based seafood alternatives. I’m excited to see what innovative products they come up with next.”

Apart from working on growing its business, in light of the current global health crisis, Good Catch also partnered with Miyokos Creamery to feed first responders and the needy earlier this month.

“We have had the privilege to partner with @miyokoscreamery to provide 4,000 meals to first responders & local families in need,” the brand wrote on Instagram.“Over the past 4 weeks, volunteers and @miyokoscreamery staff drove the #GrilledCheeseNation truck to Bay Area food banks, community centers, hospitals, shelters & school districts to deliver delicious grilled cheese sandwiches along with @goodcatchfoods tuna pouches and other plant-powered goodness.”

Share this news to let others know of the rapidly growing vegan seafood brand- Good Catch.