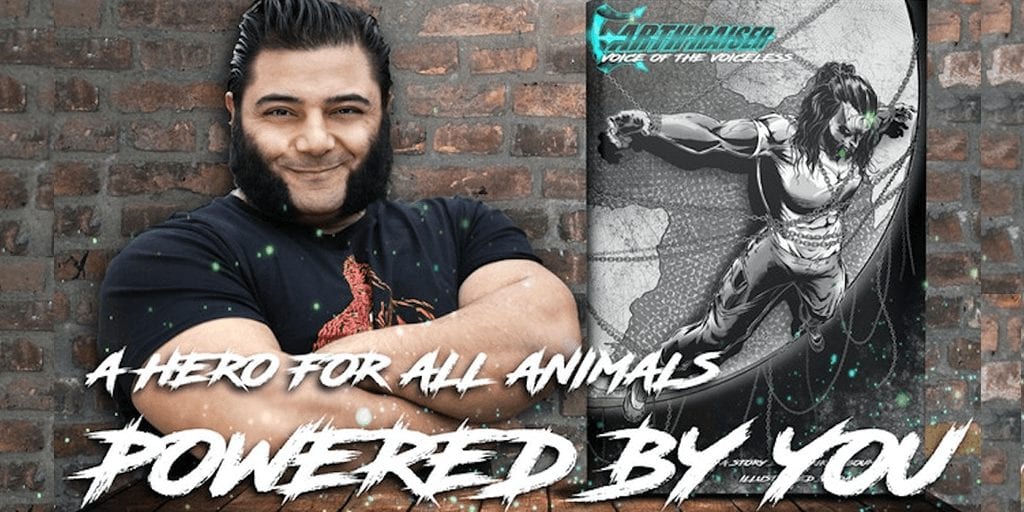 ‘After all, the animals deserve a hero powerful enough to create real change’

Vegan strongman Patrik Baboumian is gearing to release a comic book- Earthraiser: Voice of the Voiceless after investing four years in creating the concept.

The comic illustrated by artist David Padilla has a unique animal-rights theme where the superpowers of the hero inadvertently make him feel the suffering of others as if it was his own.

Baboumian believes the story can change millions of minds and hearts and “benefit those who cannot speak for themselves as well as help millions of people see the world from a very different perspective thus creating positive change within their own lives.”

“I spent many years trying to find an angle on the message I wanted to get across that would not only attract vegans who would already agree with the theme of the story but the general public,” Baboumian shared.

“After all, the animals deserve a hero powerful enough to create real change and that is only possible by appealing to a broad audience.”

He added that after years of brainstorming, he finally found the answer. “Instead of putting the emphasis on veganism, I put the emphasis on the actual problem that has to be solved. Suffering,” he said.

Earthraiser: Voice of the Voiceless

The story is about Wolf Winter, a high-level EU military agent, who because of an experimental genetic bio-augmentation-program turns into a human antenna that can feel the pain of other sentient beings within a five-mile radius.

The suffering currents are so intense, it manifests as anger in Winter driving him into a berserk state where he is compelled to fight against that which unnecessarily creates suffering in the world.

The vegan athlete intended to make a movie with the concept but decided “it would make sense to present it to the world in form of a graphic novel first before going for the more ambitious plan to turn it into a movie.”

“The huge success of films based on comic book characters in the last two decades shows the power this kind of storytelling has and I have been thinking about a way to use that power for good for a very long time,” Baboumian wrote.

To make the story compelling and credible, Baboumian also drew inspirations from his own life experiences including losing his father early and other catastrophic events that shaped him into becoming the person he is today.

Baboumian launched a  40-day fundraiser through a Kickstarter campaign and has already exceeded its first crowdfunding goal of €12,000  and is very close to achieving its second goal of  €20,000 ($22,380), which will allow Baboumian produce a 60-page limited edition of “Earthraiser- Voice of the voiceless”.

Share this story to support Patrik Baboumian in spreading the message of animal welfare.