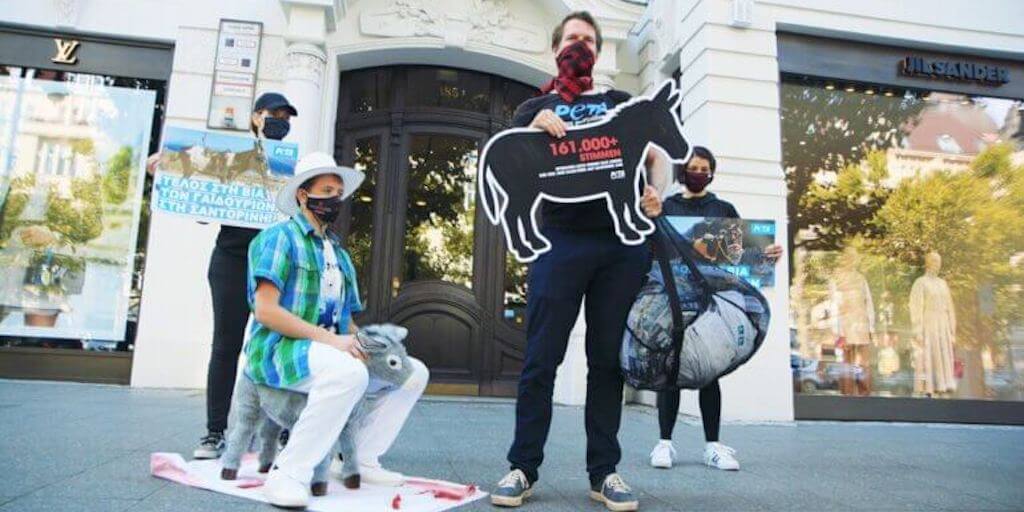 ‘It’s unacceptable that, despite years of pleas from animal advocates, a European country still allows this blatant animal abuse’

More than 161,000 supporters are calling on the Greek Minister for Agricultural Development and Food to ban cruel donkey rides immediately.

This comes after several exposés released by PETA Germany have shown how donkeys and mules are still being beaten and exploited as “taxis” on the Greek island.

According to the vegan charity, tourism from Australia, Germany, France, the UK, and other countries fuels the economy on Santorini and handlers blatantly flout the 2018 weight restriction laws, which mandates that donkeys carry no more than 20% of their own body weight.

Investigations have revealed that when not being made to carry extremely heavy loads on their backs, the animals are often made to stand in the blazing sun for hours without even water to drink.

The team also witnessed dehydrating animals stumbling and being whipped by handlers endangering nearby tourists who are on foot.

PETA added that while the COVID-19 crisis has caused a lot of damage to Greece, which is dependent on tourism, the country’s “government needs to act responsibly” now and “ban the cruel rides and allow donkeys and mules to ‘social distance’ from tourists forever at animal sanctuaries.”

“As tourists return to Greece, it’s a disgrace that gentle donkeys and mules will still be whipped and forced to carry heavy loads day in and day out under the scorching sun,” PETA said in a statement.

“It’s unacceptable that, despite years of pleas from animal advocates, a European country still allows this blatant animal abuse.

“It’s time that the Greek government implemented new legislation banning donkey and mule rides on Santorini altogether. This is the only way to prevent the animals from suffering.”

You too can join PETA in sending a message to the Greek agriculture minister here.