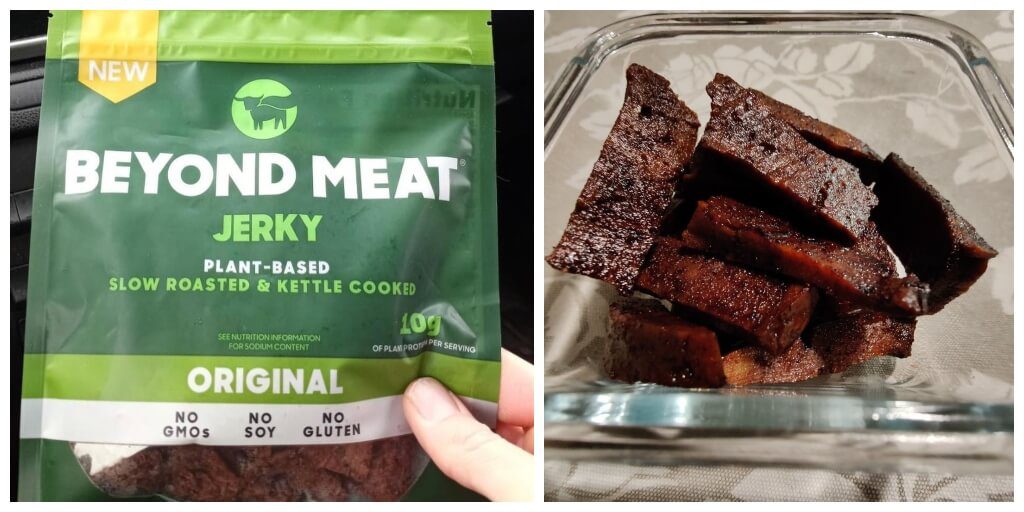 While it’s not promoted by the companies yet and is undisclosed, the vegan jerky samples have got a ‘stellar’ review.

PepsiCo Inc. and Beyond Meat Inc. are on the heels of launching their first product, which is most likely to be a vegan jerky snack, according to Bloomberg.

It comes after the two brands first announced their PLANeT Partnership collaboration last year in a bid to ‘develop, produce and market innovative snack and beverage products made from plant-based protein’.

While the two companies have yet to make an official announcement, the news was leaked by blogger Amber Criste who inadvertently revealed the product in a YouTube clip.

According to her, she was given a free sample by a shop owner and she didn’t know it was to be a ‘secret’.

The yet-to-be-released Beyond Jerky is plant-based, slow-roasted, and kettle-cooked. It features 10 grams of plant protein per serving and is free of GMOs, soy, and gluten.

Each pack contains 85g of plant-based jerky, which closely resembles the traditional snack.

The two companies will have to contend with competition in the vegan jerky market from the likes of Conagra Brands’ Gardein, Kellogg’s, Lightlife,  the Herbivorous Butcher, Vegky, Primal, and Upton’s Naturals.

However, Criste who sampled the vegan jerky reviewed it as “stellar” and very close to beef. She added that “they nailed the flavor and texture more so than the competition”.

Beyond Meat and PepsiCo have declined to comment on the release date although they have already set up a test to see if PepsiCo’s marketing strategies can successfully build the hype for plant-based meat and snack items.

In a press release published last year, PepsiCo’s global chief commercial officer, Ram Krishnan, said:  “Plant-based proteins represent an exciting growth opportunity for us, a new frontier in our efforts to build a more sustainable food system and be a positive force for people and the planet while meeting consumer demand for an expanded portfolio of more nutritious products,”  in a press release that was published last year.

“Beyond Meat is a cutting-edge innovator in this rapidly growing category, and we look forward to combining their unparalleled expertise with our world-class capabilities in brand-building, consumer insights, and distribution to deliver exciting new options.”

Ethan Brown, the founder and CEO of Beyond Meat added: “We look forward to together unlocking new categories and product lines that will inspire positive choices for both people and planet.”

Share this story: PepsiCo and Beyond Meat’s debut plant-based release is reportedly a vegan jerky.