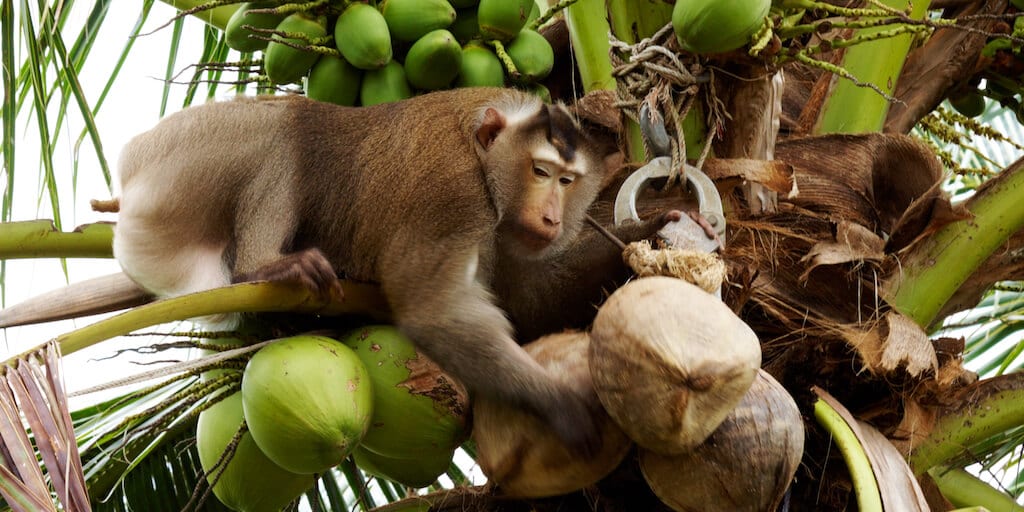 PETA is now calling on supermarket Publix to ditch coconut products from Thailand.

A major new billboard campaign in Florida is urging American supermarket chain Publix to stop stocking coconut products from Thai suppliers who have been accused of exploiting monkeys through forced labor.

The board has been created by animal rights charity PETA, whose investigators released footage of eight farms in which animals are being forced to pick coconuts for export around the world.

In the video released by PETA Asia, monkeys are seen chained, isolated from their peers, transported in cages, and forced to climb trees in order to collect coconuts day in and day out.

The captive animals also display stereotypic types of behavior, such as circling endlessly, that are indicative of severe mental anguish.

“These curious, highly intelligent animals are denied psychological stimulation, companionship, freedom, and everything else that would make their lives worth living, all so that they can be used to gather coconuts,” PETA director, Elisa Allen, said.

“PETA is calling on decent people never to support the use of monkey labor by shunning coconut products from Thailand.”

The team also sent deliveries of humanely picked coconuts to Publix’s CEO before calling it “  “ to reject its role in these monkeys’ misery and reconsider its relationship with the brand.”

Share this story to reveal the atrocities on monkeys in Thailand’s coconut picking farms.