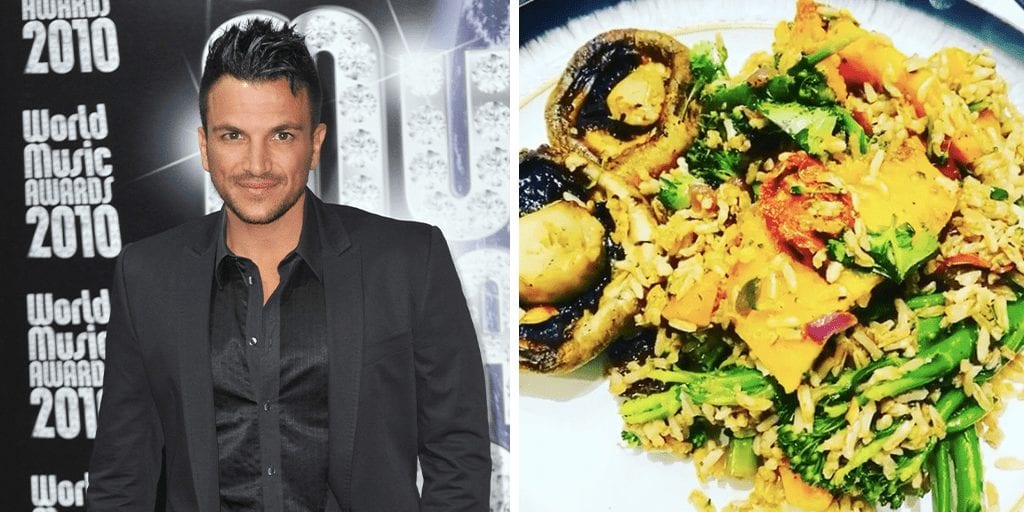 After going vegan for a week, Peter Andre has decided to cut meat from his diet.

Last week, the singer-songwriter posted a video of a delicious-looking plant-based meal that he shared with his wife Emily MacDonagh, tagging Piers Morgan in a deliberate attempt to jab the contentious and outspoken anti- vegan TV host.

“Paying homage to @piersmorgan who as we all know is a vegan lover/fanatic. We are going vegan for one week only (if I last),” wrote Andre.

“It was flipping amazing. Very surprised how tasty actually,” he added to the post and also shared the recipe of his dish.

In a follow up post, he wrote that his wife has almost convinced him to transition to a plant-based diet and going forward he would eat meat only on weekends.

“Ok so after a week of going vegan I’ve become Megan. Vegan through the week meat on weekends. Emily wins this one……for now,” read his Instagram post.

His fans welcomed the news requesting the celebrity to share his recipes.

“Can you please post the recipes………….good on Megan and Emily,” wrote one user.

“Have you any recipes out peter as some of your meals look so good and my daughter is so fussy,I think she would love some of your videos you do x,” commented another.

“You guys need to post your recipes ?,” added a third.

That Piers Morgan despises veganism is no secret as the Good Morning Britain host keeps trying to berate the food trend with his histrionics.

In a recent episode after Gregg’s launched its highly anticipated vegan steak bake, he wasted no time in launching into a rant against Greggs’ new vegan offering.

“If you Google steak, a steak is a cut of meat or fish, it’s not vegan or vegetarian.”

“That is a steak, this is not. This is actually meat and they should not be using meat terminology to sell non-meat products,’ he said referring to a picture of beef steak.

Continuing his rant, he argued: “‘It’s a total con… you’re all falling for it. Salt-laden… garbage. There’s nothing virtuous about the Greggs steak bake.”

While Morgan’s continues his love-hate relationship with veganism, several celebrities are jumping on the vegan bandwagon boosting the profile of a rapidly growing market.

Apart from Hollywood stars, recently, as many as three award ceremonies including the Screen Actor’s Guild, the Golden Globes and  the Critic’s Choice Awards also served an entirely vegan menu at their events.

The move to go plant-based was an attempt to reduce the climate impact of the food served at these elitist events and become more eco-friendly.

“The climate crisis is surrounding us and we were thinking about the new year and the new decade. So we started talking between us about what we can do to send a signal,” said Hollywood Foreign Press Association (HFPA) president Lorenzo Soria in a statement.

“We don’t think we’ll change the world with one meal, but we decided to take small steps to bring awareness.”

Do you think Peter Andre will embrace veganism completely in the future? Share your thoughts in the comments below!