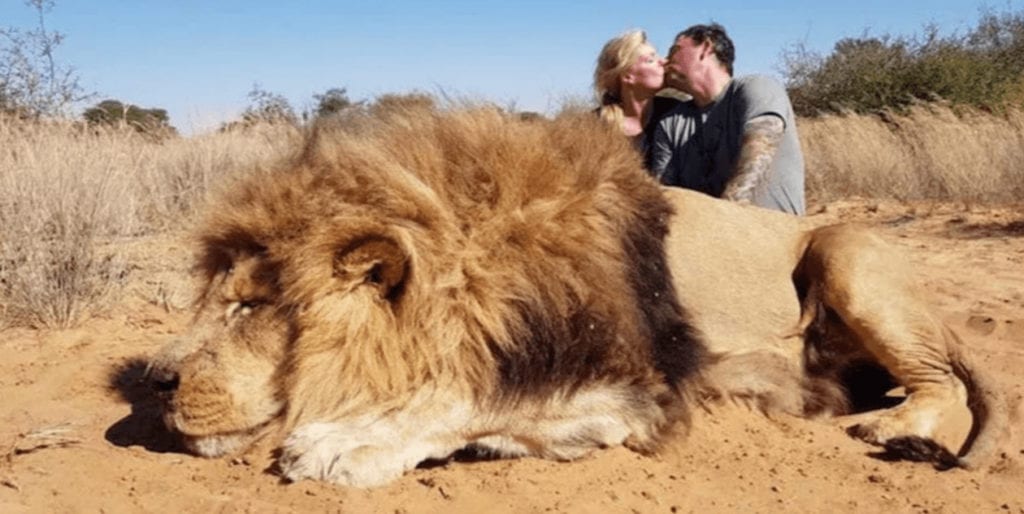 A Canadian couple have become the subject of heated global criticism for kissing over the fresh corpse of a lion in a photo.

Darren and Carolyn Carter from Edmonton, Alberta, run a taxidermy business and paradoxically describe themselves as “passionate conservationists”. Despite this self-applied label, they chose to take part in the “canned hunt” experience offered by Legelela Safaris in South Africa, during which they shot and killed at least two lions.

“Hard work in the hot Kalahari sun…well done. A monster lion.” the tour operators posted on Facebook accompanied by the image.

Accompanying another post, they wrote: “There is nothing like hunting the king of the jungle in the sands of the Kalahari!!!! Well done to the happy huntress and the team….”

When asked by The Mirror for comment, Darren Carter said simply: “We aren’t interested in commenting on that at all. It’s too political.”

Social media users have been quick to condemn the couple.

Experts say that the lions pictured in the posts were bred in captivity, for the sole purpose of being killed by tourists.

Eduardo Goncalves of the Campaign to Ban Trophy Hunting says: “It looks as though this lion was a tame animal killed in an enclosure, bred for the sole purpose of being the subject of a smug selfie.

“This couple should be utterly ashamed of themselves, not showing off and snogging for the cameras.”

One three minute video features soaring landscape shots intercut with footage of hunters loading and firing guns at birds and antelope, set to a dramatic piece of stock production music.

Another, longer and more graphic video shows actual animal deaths and close-ups of the fresh corpses, as well as testimonials from customers.

One shot features an older man kneeling behind the body of a crocodile, its mouth propped open with a stick.

“Well, two trips to Africa and I got a big one,” says the man. “Last year was fun, but, as they say with crocodiles, size does matter. This is great.”

What do you think of canned safari hunts? Share your thoughts in the comments!