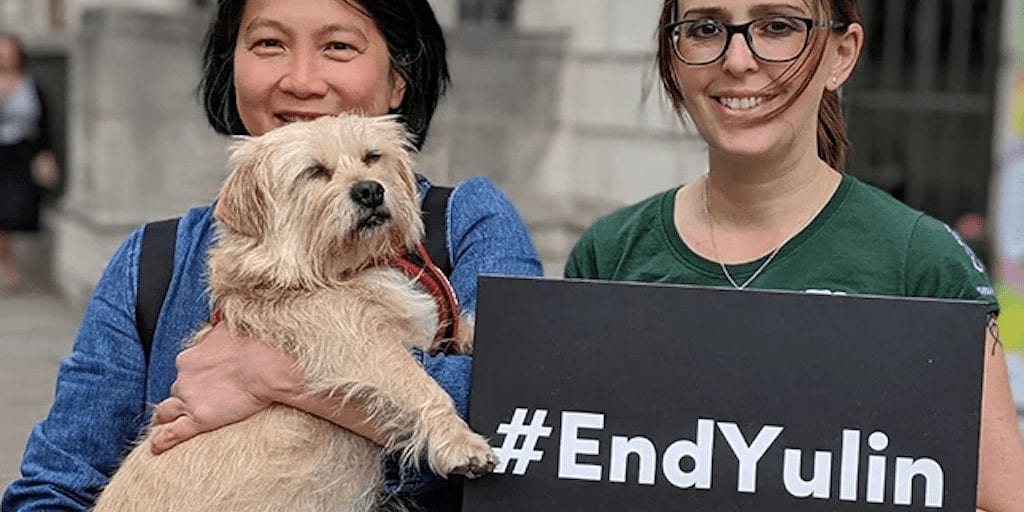 Animal rights activists battled to save as many dogs as possible in China ahead of the annual Yulin meat festival.

The event, which started last week, sees thousands of dogs and cats beaten to death and eaten – most of them stolen pets grabbed from back yards and the streets, according to Humane Society International (HSI).

Charities managed to grab around 60 dogs who were being prepared for the festival, and were living in horrific conditions.

Many were still wearing collars – signs they were pets – and activists explained the disturbing scene.

“It was swelteringly hot inside the slaughterhouse when we got there,” an anonymous Chinese activist said in a statement.

“The dogs were exhausted and panting, some pressing themselves tight against the wall in an effort not to be noticed. Others chased around our legs eager for attention.”

HSI has filed a 1.5 million-strong petition in partnership with Care2 which has been delivered to the Chinese Embassy.

There have also been heartfelt messages from the likes of actress Judi Dench to support the petition.

“It fills me with sadness to think that the Yulin dog meat festival is just around the corner again,” she said.

“So I wanted to send this message as a symbol of my solidarity with all the thousands of people in China against the dog meat trade, who love their dogs and cats just as much as we do, but who go through the awful heartache of having them stolen by dog thieves.

“I cannot imagine the suffering of those poor dogs, and I hope very much that one day soon this cruel trade will end.”

Snorki, Fred and two dogs named Lily were saved from Yulin slaughterhouses in 2016 and 2018 by activists.

HSI and the ‘ambassadogs’ were joined by Care2 as the petition was delivered.

Claire Bass, Executive Director of Humane Society International/UK, said: “The dog meat trade in China is first and foremost about crime and cruelty.

“The Yulin festival is one small but distressing example of an unspeakably cruel trade run by dog thieves and sellers who routinely steal pets in broad daylight using poison darts and rope nooses, defy public health and safety laws, and cause horrendous suffering, all for a meat that most people in China don’t consume.

“Dogs like Snorki, Fred and Lily are amazing ambassadors for our campaign to end this horror, we are proud to deliver this petition with them. And we’re immensely proud to support dedicated animal advocates in China who passionately work to end the dog meat trade, saving so many lives along the way.”

What do you think of the Yulin festival? Share your thoughts in the comments below!