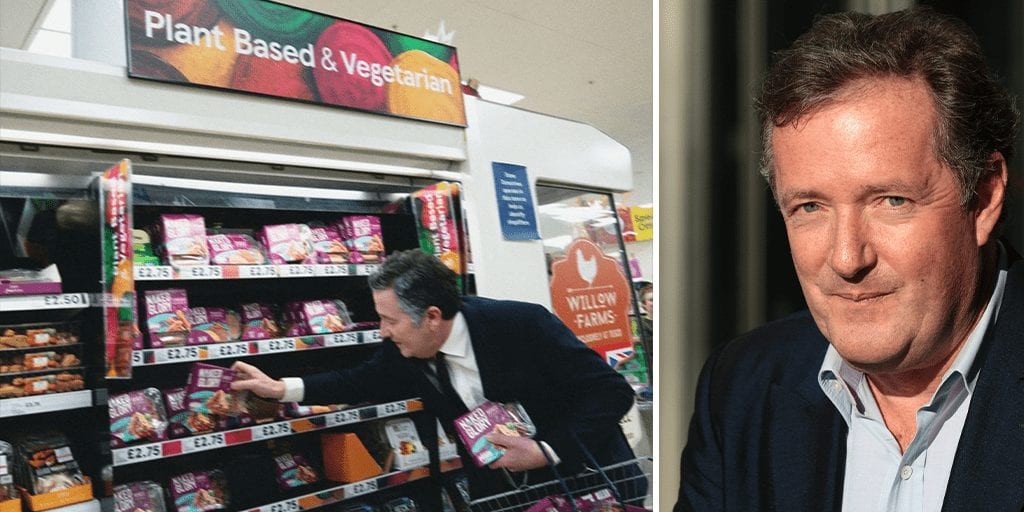 Vegan-hater-in-chief Piers Morgan has yet again inadvertently boosted veganism in the UK after seemingly being pictured stocking up on plant-based products in a supermarket.

The Good Morning Britain presenter jumps at any opportunity to put down veganism – notably his hysterical reaction to the Greggs vegan sausage roll last January.

But his attempts to ridicule veganism have consistently backfired and only boosted the profile of a rapidly growing market.

And as Veganuary goes from strength to strength, this year attracting a record 350,000 signups and counting, the month-long plant-based challenge has made Morgan the butt of the joke once again.

The official Veganuary Facebook page posted an image of what appears to be Morgan diving into the vegan section at a supermarket and picking up a Naked Glory product – which is a purely plant-based company.

😱😱😱 Is that Piers Morgan in the vegan aisle….😜 Actually, it’s not Piers, and Naked Glory isn’t meat, but you’d think…

Posted by Veganuary on Tuesday, 7 January 2020

“Is that Piers Morgan in the vegan aisle….?” Veganuary asked.

“Actually, it’s not Piers, and Naked Glory isn’t meat, but you’d think they’re both the real thing! Have you tried their meat-free range yet? It’s available in Tesco and Asda if you want to try it out!”

The image has been shared far and wide on social media, with many believing vegan food is Morgan’s secret guilty pleasure.

Luckily for vegans across the UK and beyond, Morgan hasn’t learned his lesson and continued his assault by targeting the Greggs Vegan Steak Bake this month, describing the product as ‘a con’.

“It’s not a steak. ​If you Google steak, a steak is a cut of meat or fish, it’s not vegan or vegetarian,” he said.

“That is a steak, this is not. This is actually meat and they should not be using meat terminology to sell non-meat products.

“It’s a total con, you lot are all falling for it. There were queues around the block at some Greggs in Newcastle, probably all people who’d been paid to be there.

“You’re all falling for it. Salt-laden… garbage. There’s nothing virtuous about the Greggs steak bake. The nation’s become a nation of lemmings.”

Veganuary is still accepting entries, and anyone wanting to ditch animal products this month can sign up here.

What impact does Piers Morgan have on veganism? Share your thoughts in the comments section below!