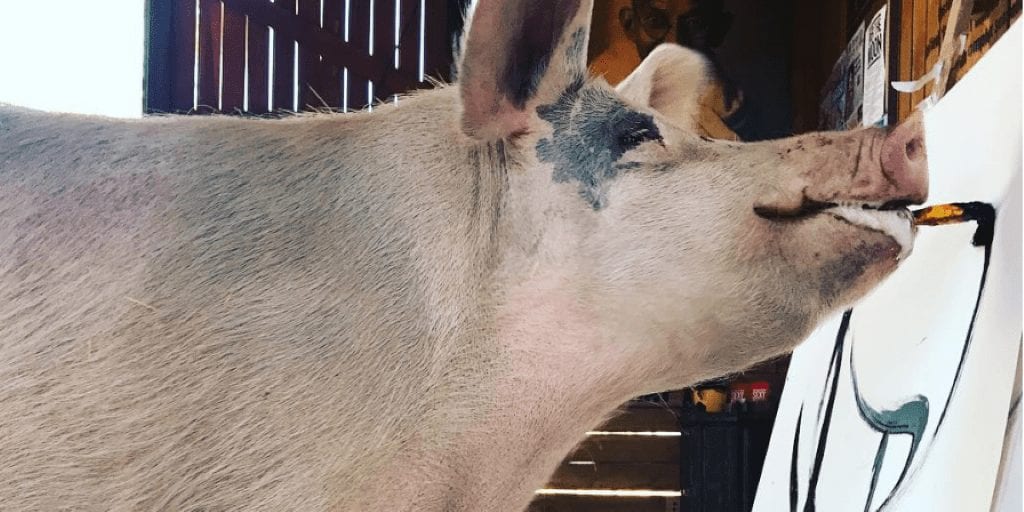 Meet Pigcasso, the astonishing 3-year-old piggy artist who is taking the world by storm.

The sensational animal has wowed the world of art with his unique, abstract paintings which sell for up to $4,000, all of which is invested back into her sanctuary.

Pigcasso even has her own exhibition ‘OINK’, and has raised more than $145,000 for Farm Sanctuary SA near Cape Town, South Africa.

But Pigcasso wasn’t always living the extravagant life of an artist. The incredible pig was rescued from an industrial pig farm in 2016 where she was destined to be turned to bacon.

But luckily for the cheeky piggy, and the world of art, she was rescued and re-homed in the sanctuary.

When Pigcasso arrived, she had a selection of toys to play with, but she only had her eye on one thing – the paintbrush.

“For some reason she took a knack to the paintbrushes and it wasn’t long before she was dancing the brush across the canvas and selling artworks all over the world,” the sanctuary’s founder Joanne Lefson told CBS News.

Every one of Pigcasso’s paintings are personally signed with her nose tip. She’s become such a sensation that she even has a partnership with Swiss watchmaker Swatch.

Lefson continued: “I am so proud of Pigcasso. From pork chop to global Swatch designer, it’s just another reason to see pigs as the smart creative divas that they are — and to eat less bacon and to go shopping instead!”

The 1,000 pound pig uses a custom-made brush and non-toxic paint, and signs with beetroot and acrylic ink.

Picasso has gone from strength to strength after being reported in media publications across the world.

The sanctuary described its piggy hero: “From pork chop to heralded headliner, Pigcasso is on a mission to paint a better picture for the planet. She’s also giving connoisseurs the opportunity to invest in a masterpiece – and that’s no hogwash!”

What do you think of Pigcasso’s artwork? Tell us in the comments below!