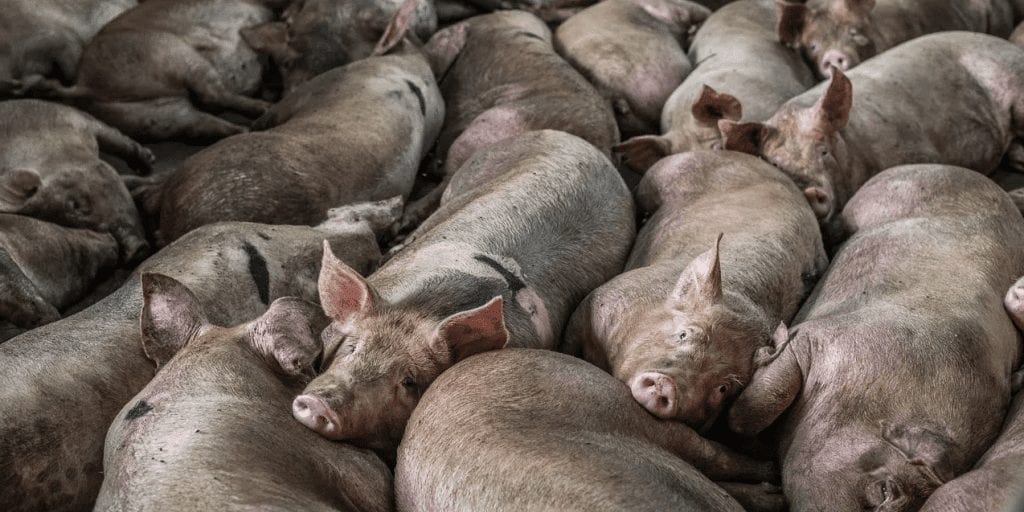 Pigs huddled together in a holding pen at a Thai slaughterhouse. Image: We Animals Media

A photographer has exposed brutal practices in the Thai pork industry with a collection of horrific images of animal abuse.

Animals are also shown stunned on their eyes with homemade stunners in abattoirs which activists say have little regulation.

Pork is a staple food in Thailand, where 18 million pigs are reared for slaughter every year.

Pigs were also slit open with a knife and allowed to bleed out before being dragged into boiling water.

“Caged transport is a common mode of transport in south-east Asia. Usually the animals arrive cramped, dehydrated, exhausted and severely sunburnt if they’ve been transported during the day, often across borders,” Blaszak told The Guardian.

“Then you’ve got poor unloading and handling of the animals: falling and slipping pigs, or pigs which are dropped, dragged, beaten and kicked. Clubbing is a manual attempt to stun an animal – to render it unconscious before killing by bleeding by knife. But clubbing is very ineffective in pigs.

“The simple speed of manual clubbing cannot meet the necessary energy for an effective stun. Clubbing just beats, bruises and abuses animals and is ineffective.

“Electrical stunning is sometimes done and usually with completely unregulated stunning equipment, which is sometimes homemade. It’s consistently wrongly applied and completely ineffective as it doesn’t even span the brain. It’s just cruel electric shock and pain. Good practical training and enforcement can overcome all these issues, to the benefit of all involved.”

Thailand does have laws which require pig slaughterhouses to run ‘without suffering’ inflicted on animals, but activists say this is rarely enforced.

UK vegan activist Will Holmes described the practices as ‘cruel and disturbing’.

“But unfortunately, not surprising when you consider how the world generally view pigs as products rather than individuals,” he told Totally Vegan Buzz.

“Regardless of the method of slaughter, taking the life of someone who doesn’t want to die for an unnecessary reason is never humane.

“We should all boycott the industry, whether in Thailand, the UK or anywhere else, to reduce the demand for killing these animals.”

The slaughterhouse has not responded to requests for comment.

What do you think of this investigation? Share your thoughts in the comments below.