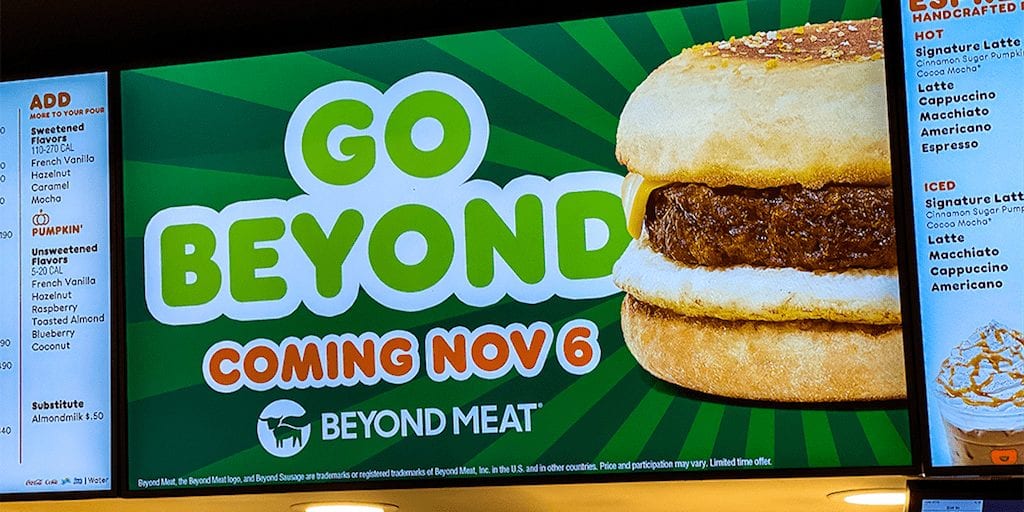 Current chairman and former CEO of fast-food chain Dunkin’ Nigel Travis has been on the corporate fast-food scene for nearly five decades and he thinks that plant-based food is a trend here to stay.

In his 50 years of managing food businesses including leadership at Burger King and CEO of Papa John’s to the CEO and subsequent chairmanship at Dunkin’, Nigel Travis has gained deep insight about the shifting trends in the fast food industry.

According to him, the plant-based food market has “changed dramatically” in the last five years and he feels the trend is “interesting” and catching on.

In an interview with Yahoo Finance, he said: “I go to see my doctor as you should do at my age, and all he talks about is plant-based foods. I really think it’s a trend.”

To make the most of the growing trend, Dunkin struck a partnership with Beyond Meat to create the plant-based breakfast offer made with a vegan English muffin and a Beyond Meat sausage patty, omitting the dairy cheese and egg to make the meal vegan.

‘We are really happy with what has happened with Beyond Meat at Dunkin,” said Travis.

Following a successful trial in Manhattan in July this year, food giant Dunkin’ rolled out the new meatless sandwich in more than 9000 locations across the U.S.

“We are extremely proud of our partnership with Beyond Meat and thrilled to be the first US quick-service restaurant to offer Beyond Breakfast Sausage nationwide,” said Travis’ successor Dave Hoffmann, Dunkin’ Brands current CEO in a statement.

Speaking at the time the Beyond Sausage Breakfast Sandwich was rolled out nationwide, Ethan Brown, Founder, and CEO of Beyond Meat, said: “We’re excited to introduce the Beyond Sausage Sandwich nationwide and in doing so, offer an option with fewer calories, less total fat, saturated fat, cholesterol, and sodium, while delivering more protein and iron than a comparable pork sausage sandwich,”

“We are excited that everyone who runs on Dunkin’ now has the option to make a delicious plant-based sausage sandwich part of their day.”

Future and the plant-based market

Food trend analysis have revealed that rising consumer concerns on the effects of the intake of too much meat on health, animals and environment have led to a burgeoning demand for sustainable plant-based foods.

“We expect that outsized growth will continue for plant-based products, both in the U.S. and globally.”

In another report, Barclays forecasted rising demand, and increase in population as major factors to boost the plant-based market from 1 percent in 2019 to about 10 percent in 2029, which means $14 billion in 2019 to $140 billion by 2029.

According to a report by Allied Market Research, the global alt meat market dominated by products prepared from tofu, tempeh, textured vegetable protein, seitan, Quorn and other plant-based sources is projected to reach $8.1 billion by 2026, up from an estimated US$4.1 billion in 2017.

Where will veganism be in the next 10 years? Share your thoughts in the comments below!