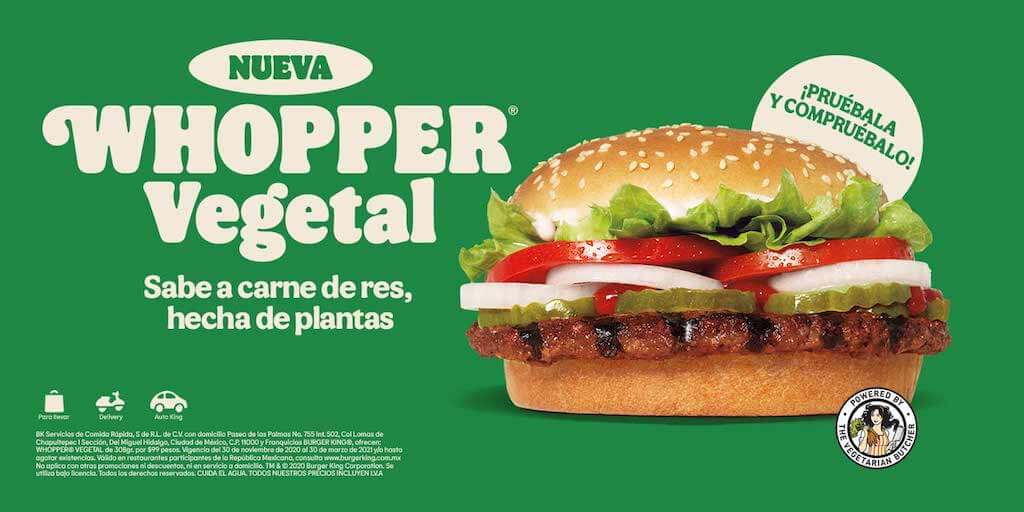 “Research shows that, in the last six years, the number of people looking for an alternative to animal meat has almost doubled in Mexico.”

The Burger King recently rolled out the Whopper Vegetal at 201 locations across Mexico.

It is the first time the chain has added a meatless burger to the menu.

The Whopper Vegetal touted to ‘cook and taste like beef’ features a patty made by Unilever owned Dutch brand The Vegetarian Butcher and is served with lettuce, tomatoes, pickles, and onions.

“With 0% meat, the new Vegetarian Whopper® has exquisite plant-based ingredients, making it the best choice for meat-loving guests, but who are looking to try new things – burger options with the delicious taste and texture of the traditional Whopper®,” Guillermo Hermosillo, Marketing Director of Burger King® Mexico said.

“We invite all our customers to try, and why not? to notice some difference between a Traditional Whopper® and a Vegetable Whopper®.”

“At Unilever, we are very excited to expand our partnership with Burger King. The Whopper Vegetal offers meat lovers a delicious option that is cooked and tastes like beef, but is 100 percent plant-based,” said Adelma González, General Director of Unilever Food Solutions Mexico and North of Latin America.

“Research shows that, in the last six years, the number of people looking for an alternative to animal meat has almost doubled in Mexico. We are bringing in The Vegetarian Butcher to meet this growing demand with history, performance, and flavor.”

While makers of the Whopper Vegetal claim the food item is 100 % plant-based, it is unclear whether the burger will be cooked on the same surface as Burger King’s non-vegan options.

Share this story to let others know about the new vegan Whopper launched at Burger King’s.