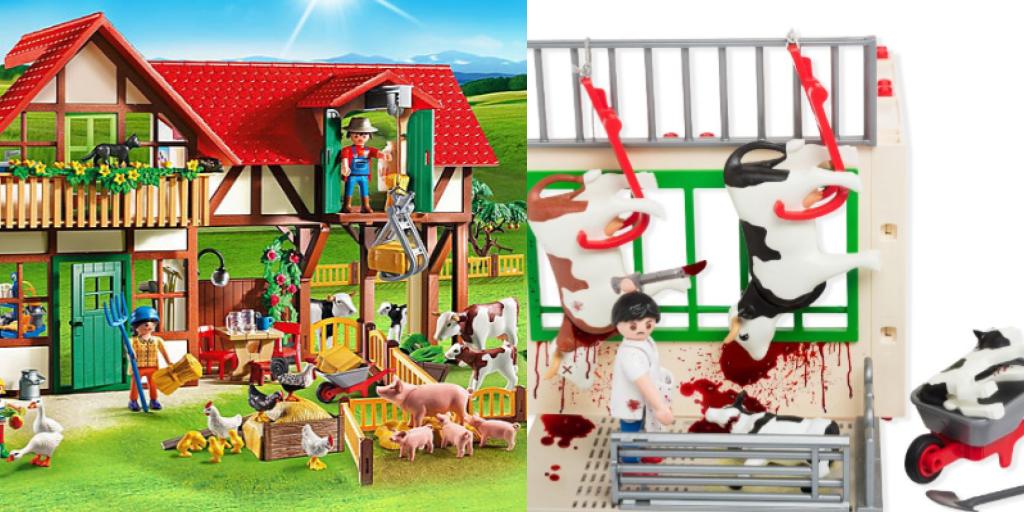 Toy giant Playmobil has been urged to remove the ‘misleadingly happy-looking’ animal figures from its Large Farm toy set and replace it with a more realistic, gory depiction of the reality of a slaughterhouse.

Animal welfare charity PETA has argued that the toy misrepresents the reality of life for farmed animals – who endure suffering and violence.

The group has proposed that it release a ‘My First Abattoir’ set, which would show children the way cows are truly treated in the dairy industry.

Cows used for dairy are routinely sent to slaughter once they no longer produce enough milk to be profitable to farmers, PETA explained.

The ‘My First Abattoir’ toy includes two cow figures who have been hung upside down and their throats slit.

Because male calves are largely considered useless to the dairy industry, the set depicts a calf who has been dumped in a wheelbarrow for disposal.

“If Playmobil is going to offer toys representing businesses that exploit animals for food, it should at the very least not misrepresent the conditions in which they live and die,” PETA Director Elisa Allen said.

“PETA is calling on the company to stop lying to children about the horror and cruelty behind every glass of cows’ milk and every beef burger.”

PETA – whose motto reads in part that ‘animals are not ours to eat’ – opposes speciesism, which the charity says is a ‘human-supremacist worldview’.

The group notes that each year, the food industry is responsible for the daily suffering and terrifying deaths of billions of animals – who experience joy, pain, fear, love, and grief and value their lives, just as humans do.

PETA said in statement sent to Totally Vegan Buzz: “In today’s meat, egg, and dairy industries, cows are forcibly separated from their beloved calves, chickens’ throats are slit while they’re still conscious, and piglets may be castrated and their tails cut off without painkillers.”

What do you think of PETA’s toy? Tell us in the comments section below!