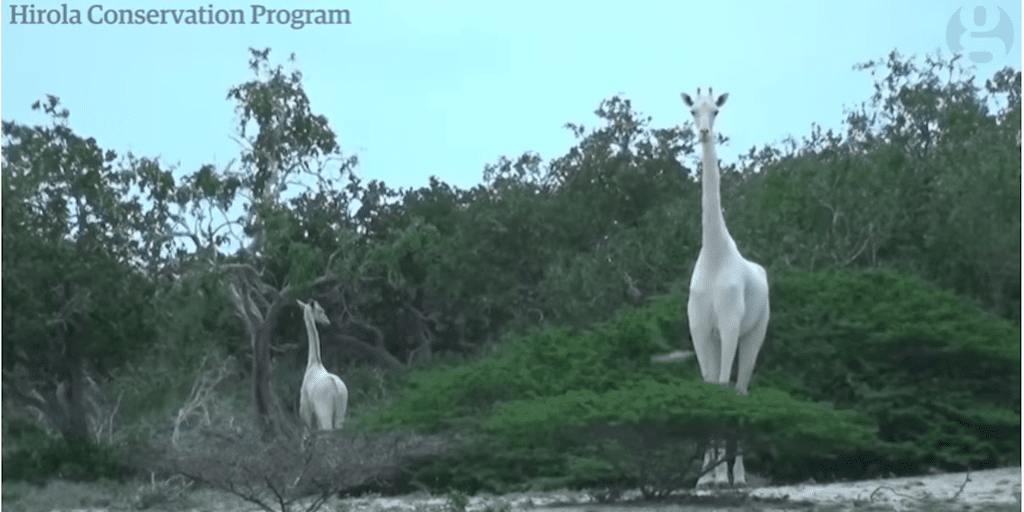 Rangers of The Ishaqbini Hirola Community Conservancy in northeastern Kenya confirmed the death of the rare white female giraffe and her 7-month-old calf in a press release.

“This is a very sad day for the community of Ijara and Kenya as a whole,” said Mohammed Ahmednoor, the manager of the Ishaqbini Hirola Community Conservancy.

“We are the only community in the world who are custodians of the white giraffe.”

The Kenya Wildlife Service was called for rescue operations after the giraffes were found missing.

The officials on finding the carcasses suggested the animals were killed four months ago by poachers, although they have not yet been identified.

The unusually coloured giraffes were first spotted in 2017 with a third one born in 2019.

Their white appearance is attributed to a rare condition called leucism, which causes a partial loss of skin pigmentation. It is different from albinism in that leucism allows dark pigment formation in the animals’ soft tissue cells, which is why giraffes with this condition have dark eyes and dark tail hair.

Barring an adult white male giraffe in the park, there are no more white giraffes remaining in the wild.  Outside Kenya, only one other white giraffe was seen in Tanzania’s Tarangire National Park in January 2016, according to Kenya’s Northern Rangelands Trust.

However, there is no information on that giraffe’s survival.

According to Ahmednoor, the killing of the 2 giraffes has been “a blow to the tremendous steps taken by the community to conserve rare and unique species, and a wake-up call for continued support to conservation efforts.”

The Kenyan Wildlife Service, the main conservation body in the East African state, announced it was investigating the killings.

“We are investigating reports of the deaths of a white Girrafe and a calf in Ishaqbini Conservancy in Garissa County,”  the group wrote on Twitter.

“We wish to inform the public that we work closely with all community managed conservancies in protecting wildlife.

“Our personnel on ground are jointly working with community rangers and the conservancy management to establish the facts about the incident.”

But people weren’t impressed and expressed their anger on social media.

“4 MONTHS AGO and you claim to work “closely” with conservancies? Where is that KSH 700K you got from the @KorogaFestival  at Hell’s Gate gone to! Have you paid the rangers?,” tweeted a user.

“The day we found the 3 white giraffes, you should have moved them to a safer park where they’d have been safer. Yet more wildlife deaths in your hands. Sorry but yet again we have a useless DG at the helm of KWS,” wrote another.

“the level of incompetency/unaccountability of state officials/institutions is mind boggling. Imagine @kwskenya discovering bones of the Kenya’s only white Giraffe 4 months after being killed by poachers. This is evidence of fatal criminal negligence,” added a third.

We are investigating reports of the deaths of a white Girrafe and a calf in Ishaqbini Conservancy in Garissa County.
Our teams on the ground have seen bones believed to be those of the two giraffes. The bones are estimated to be four months old.

According to the Giraffe Conservation Foundation, the population of reticulated giraffes has declined by more than 50 percent in the past three decades, from 36,000 in 1988 to 15,780 in 2018.

Officials say illegal poaching for hides, meat, bones, and tails and loss of habitat due to increase in human activities have been the main factors threatening their survival.

Share this story to reveal how illegal poaching and increased human interference are threatening the survival of indigenous species on earth.