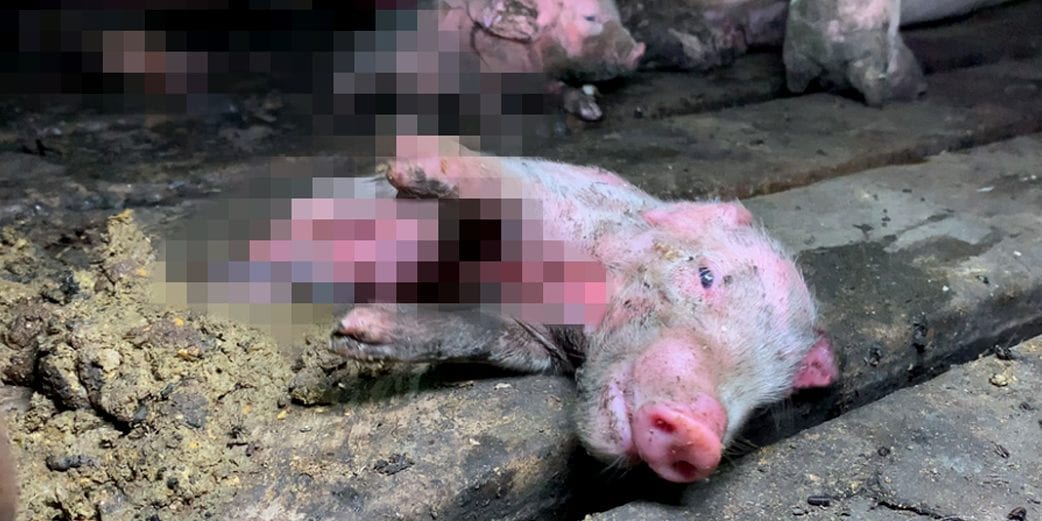 A major US pork company has cut ties with a pig farm after activists exposed horrific abuse at its slaughterhouse.

An investigation by PETA showed pigs with bloody sores, mother pigs so injured they could barely move, and dying piglets left to rot alongside their surviving siblings. The shocking footage shows a farm named by PETA as Indiana’s East Fork Farms, which has ties to JBS USA – the nation’s second-largest pig slaughterer and maker of Swift pork.

After Totally Vegan Buzz contacted JBS regarding the harrowing footage, the company revealed it has ditched the farm on the back of the investigation.

A spokesman told TVB: “JBS USA was recently made aware of an undercover video allegedly filmed at a sow farm in Indiana. Though we do not directly purchase pigs from this farm, there is a chance that some of these pigs could end up in our supply chain.

“As such, we have taken immediate action and notified our suppliers that JBS USA will not accept any hogs that originated from the farm in the video until a thorough third-party investigation is completed.

“We take this matter very seriously and do not condone violations of our animal welfare standards anywhere in our supply chain.”

Among other issues, the video shows that piglets – whose mothers couldn’t reach them because they were trapped in gestation and farrowing crates – died, and one deformed baby was left to die slowly next to his surviving siblings.

PETA reported that a worker cut off piglets’ tails without any pain relief and then threw the animals several feet through the air.

“In addition, the waste system was brimming with feces and urine. Rats, roaches, maggots, and other insects had free run of the dilapidated sheds, which were littered with the decomposing bodies, tails, and heads of dead piglets,” the group said in a statement.

Warning: The below graphic imagery may find upsetting by users

“Mother pigs are practically immobilized in crates barely bigger than their bodies, piglets’ tails are crudely chopped off, and trampled piglets are left to twitch on the floor,” says PETA Executive Vice President Tracy Reiman.

PETA has asked the Indiana State Police to investigate the farm and has alerted the Indiana Occupational Safety and Health Administration to worker safety concerns there.