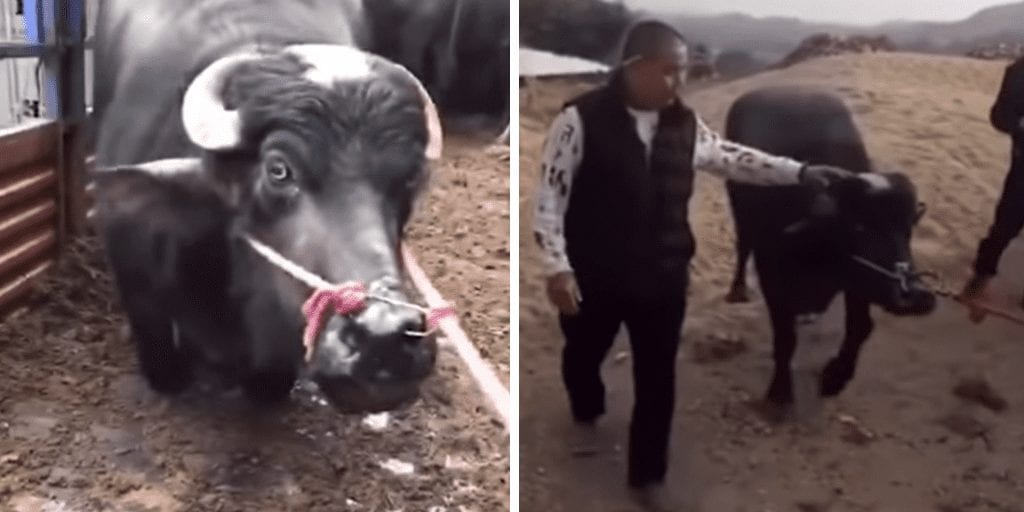 A pregnant cow’s life has been saved after an emotional video from a slaughterhouse captured the hearts of the Chinese public and led to £2,700 in donations.

Footage showed the cow kneeling in front of slaughterhouse employees and appearing to cry in a pose which appears as if she is begging for her life to be saved.

The video which was filmed in Shantou in Guangdong Province was shared far and wide and led to overwhelming support and enough money for activists to buy the cow and rehome her in a Buddhist temple.

According to reports in local publication The Paper, the cow knelt as soon as she arrived at the slaughterhouse.

Insider Lin Wangbo said: “After it arrived at the slaughterhouse and when the butcher tried to drag it off the truck and into the house to be butchered, it knelt and kept crying.”

The emotional video was filmed by one of the slaughterhouse workers and went viral after it was uploaded to Chinese app WeChat.

Some local commenters have speculated that the cow may have become overly protective of its own life and that of its unborn baby after becoming pregnant.

The cow has now been saved and transported to a nearby Buddhist temple, Lin told The Paper.

A clip filmed after the campaign depicted members of the public who arrived to pick up the cow and transport her to safety.

And the group’s bond with the cow grew ever stronger after the cow knelt in front of the car again for another minute after they released her, according to reports.

Share this article to show the world how the relationship between humans and animals should be. What do you think of the generous donations? Share your thoughts in the comments section below!