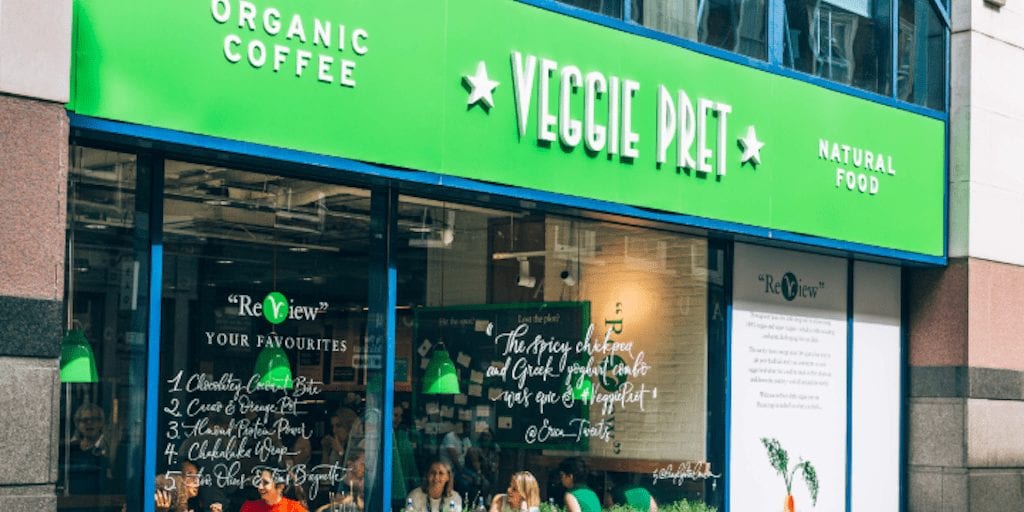 Pret a Manger is planning to ramp up its focus on the plant-based market with the expansion of its Veggie Pret brand.

The chain is in talks to buy ‘the majority’ of sandwich chain Eat’s 96 stores to assist the development of its vegetarian and vegan branch, according to reports.

At the moment Pret only has four Veggie Pret stores – one in Manchester and three in London – so the acquisition is a sign that the company is looking to hugely up its plant-based game.

Eat’s stores are mostly in London, but the sandwich chain also has locations in Birmingham and Manchester.

The London Evening Standard reported that Pret was looking to capitalise on a rapidly growing demand for plant-based options.

But Pret has since refused to comment on the deal, saying in a statement: “We never comment on rumour or speculation.”

The range includes homemade gluten-free bread topped with smashed avocado for £3.25, coconut, five berry compote, fresh blueberries and coconut chips for £3.25 or with almond butter and berry bircher for £2.35.

Pret also now stocks tropical bircher granola for £2.99, a hummus and chipotle wrap for £2.99, a roast mushroom and smashed avocado pot for £2.99 or the Asian-style veggie box at £4.50.

Pret’s Head of Food Development, Hannah Dolan, at the time of release said in a statement: “Our new range is big on vegan food and veg. There’s a real emphasis on that because that’s what customers want.

“We’re so excited to launch our colourful new spring menu, our biggest change in our history, which is a result of listening to what our customers want.

“Our team of chefs have taken inspiration from all over the world for this new menu and have worked incredibly hard to perfect each and every ingredient. From flavoursome roasted mushrooms, to our own gluten-free bread, which we honestly believe is one of the best out there right now.”

Tesco, Saindbury’s, Marks & Spencer and Waitrose have all introduced extensive vegan ranges, while Tesco has recently closed down the meat and fish counter in 90 stores due to drastically falling demand.

What do you think of Pret’s new range? Share your thoughts in the comments below!