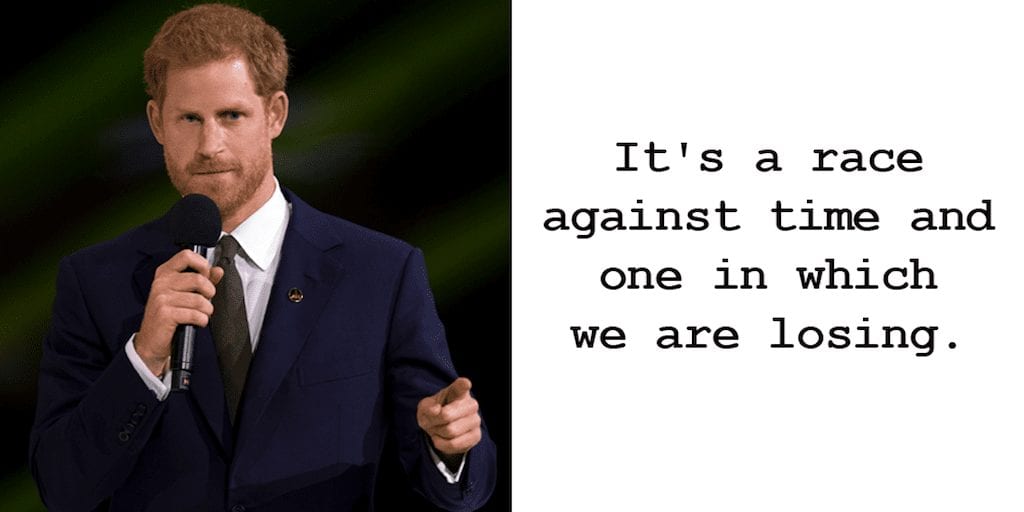 Prince Harry has come out in support of Greta Thunberg’s climate change strikes, arguing that ‘everyone knows it, no-one can deny science’.

The Duke of Sussex said the climate effort is a ‘race against time’ and supported millions of children around the world for skipping school last Friday (September 20).

The Prince made the comments on a trip to the Chobe Tree Reserve in Botswana where he has been planting trees.

The area has seen decades of intense deforestation, and Harry was working to help restore the environment.

“This last week, led by Greta, the world’s children are striking,” he said.

“It’s a race against time and one in which we are losing. Everyone knows it, there’s no excuse for not knowing that.”

He said there has been sufficient evidence for climate change action for the past 30 years.

“And it’s only getting stronger and stronger,” he added.

Prince Harry is an outspoken environmental activist, and reports suggest he and Meghan Markle will raise their children vegan.

Gretan Thunberg, the Swedish vegan activist who has inspired strikes around the world, gave an emotional address at a UN conference on Monday, where she spoke of the ‘betrayal’ of world leaders to young people.

“The eyes of all future generations are upon you. And if you choose to fail us I say we will never forgive you” she said.

“We will not let you get away with this. Right here, right now is where we draw the line. The world is waking up. And change is coming, whether you like it or not.”

Though she has received worldwide praise for her speech, some used the opportunity to put down the 16-year-old activist.

In a recent interview, Fox News guest Michael Knowles described her as a ‘mentally ill Swedish child’ who he said was being used by her parents and the left.

But Greta got her revenge after she changed her Twitter bio to mirror the president’s patronising tweet.

What do you think of Harry’s environmental efforts? Share your thoughts in the comments section below!