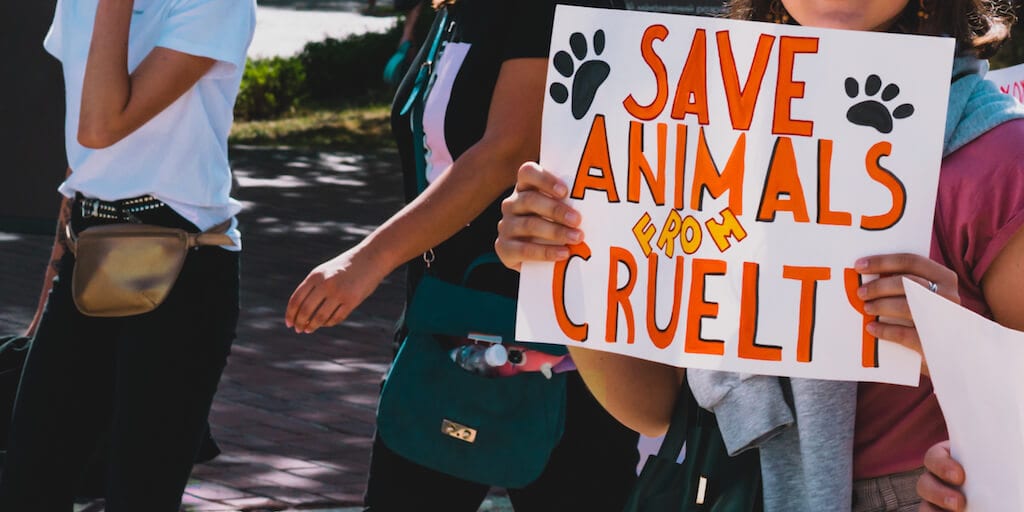 KFC chicken legs were thrown at vegan activists peacefully protesting for an end to the exploitation of animals, reported local media outlet StokeonTrentLive.

Activists, who were seen standing holding a huge 10 metre ‘friends not food’ banner said the aim of the protest was to question “people why they think it’s ok to eat pigs when they have been proven to be as intelligent as dogs.”

While many motorists driving by beeped their support, some heckled the protesters by lobbing their KFC at them.

‘Hit by a chicken leg’

Narrating the incident, Bradley Shaw, a spokesperson from the group told the news platform that whilst protesting, “at one point a car went around the roundabout and we were hit by a chicken leg.”

“There’s a KFC just up the road so I think they had seen us and gone there and decided to taunt us,” he said.

“We could see their mates filming in the car and hear them shouting and laughing. They just think it’s a bit of fun to have a go at a vegan.”

‘Asked to clear off’

The spokesperson shared that some staff of the Longport-based company also approached the group to enquire what was going on.

“They were giving us a bit of stick at first and told us to clear off,” Shaw said.

“When they realized we weren’t going anywhere, they basically left us alone. We ended up having a civil conversation.”

The activist group said the protest was fruitful, as it was able to engage many passersby and also hand over leaflets explaining their stance.

“A lot of people were interested in what we had to say,” said Shaw.

“Overall, we had a good response although we did get abused more than we normally would when we’re in Hanley.”

Shaw, who is an electrician, by profession told the news outlet the group will be organizing more events in the future.

“We’re planning on doing something similar again although we’re yet to set a locations and date. It could be that we target McDonald’s or somewhere like that,” he said.

‘Used to getting ridiculed’

Brushing off the incident of being pelted by chicken legs, Shaw added: “I work with 300 people so I’m used to getting ridiculed for my beliefs.

“It’s definitely a controversial topic and provokes a strong reaction in people.

“But we’re here to stand up for the animals and we’re not going anywhere.

“If anyone treated a dog how we as a society treat pigs, they would be arrested. We get trolled a lot online but we’re just used to that.”

‘Should not push their agenda’

Speaking about the protest, Wayne Walker’s shop manager, Michael Patrick, told the media outlet: “We don’t have a problem with what they stand for but I don’t think they should be pushing their agenda on to other people.

“Their biggest problem seemed to be that we sell meat at low prices but we don’t actually slaughter any animals.”

Police also attended the event but no arrests were made as the protest passed off peacefully.