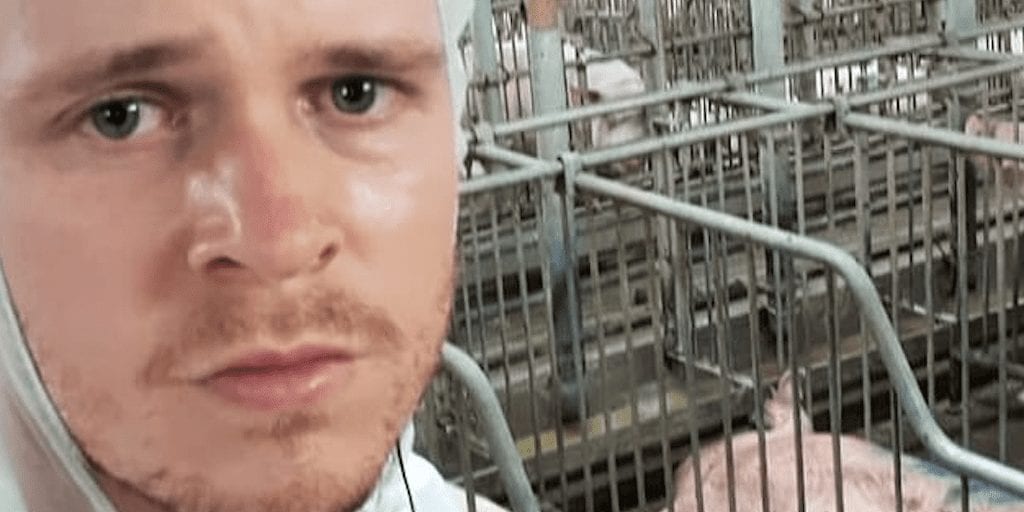 An infamous vegan activist who hit the headlines for an angry confrontation with a farmer has been arrested, after he posted a video of himself at another farm exposing the horrific conditions pigs live in.

James Warden of global group Direct Action Everywhere is yet again in the spotlight after he live streamed from inside GD pork farm near Perth, Australia on the activist group’s Facebook page.

In the 80-minute video Warden complains about the pigs’ horrific living conditions.

Pigs are shown with open wounds and bruises inside 1.5m by 2m pens. Warden also discovers a group of dead piglets on the floor which he speculates were either crushed to death or killed.

Piglets’ genitals were cut off and teeth pulled out to prevent them from hurting each other in the tiny pens, and an adult is seen with a bullet in its head and intestines hanging out.

“These are the standard conditions these animals are kept in, subjugated and enslaved,” Warden said.

“Kept in small cages where they’re barely able to move. They’ll be keep confined their entire lives until they’re three to five years old and then they will be murdered.

“They have pressure wounds on their shoulders from where they rub against the bars for weeks. It’s absolutely sad and sickening.

“If this was done to a dog the owner would be thrown in jail and made to pay a hefty fine but because it’s another species, it’s fine.”

Warden has been the face of DxE Australia in recent times. Earlier this month an Australian farmer fired shots in the air after clashing with Warden and other activists amid complaints they were filming his cows and refusing to leave.

And last year he targeted an Australian steakhouse telling diners that ‘meat is murder’.

Warden was arrested following the most recent video, but Direct Action Everywhere raised $1,200 in donations within an hour to secure his release.

Since the protest Warden has received thousands of abusive messages, including death threats, and his Facebook page is littered with anti-vegan insults.

Warden explained his radical methods aim to make people who might otherwise not see such horrific conditions aware of the shocking reality.

“We’re showing people the suffering these animals are enduring. All of these beautiful sentient beings are going to be murdered for people’s food,” he said.

“Animal love resides inside everyone, people don’t know where their food comes from.

“It’s important that those engaging in this type of activity are held accountable not only for the illegal activity but also for the misleading, sensational, and selective footage that is not reflective of how the industry operates.”

What do you think of Warden’s arrest? Tell us in the comments below!