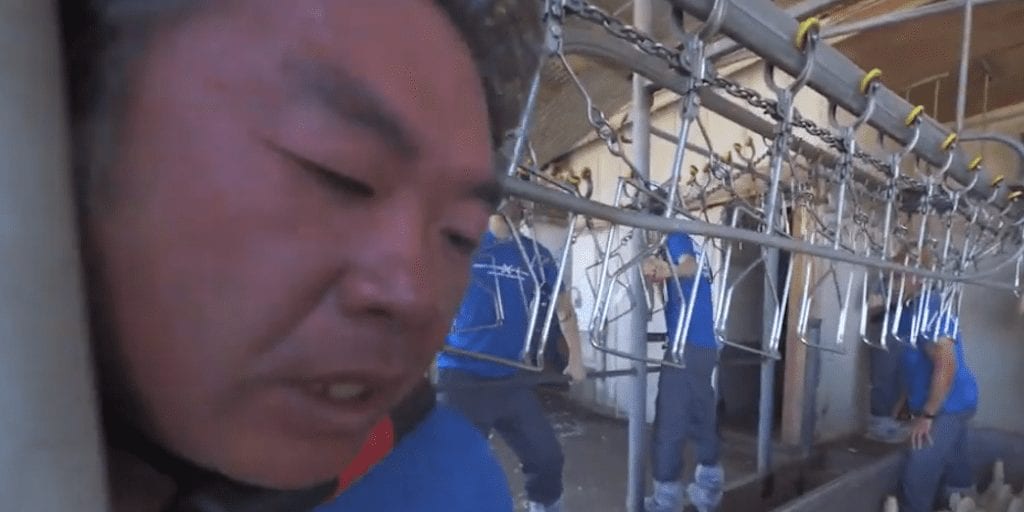 100 Direct Action Everywhere protesters were arrested in the demonstration. Image: Condition One/ YouTube

When 600 activists descended on Petaluma’s Reichardt Duck Farm in San Francisco, one protester almost paid the ultimate price in his attempts to fight for abused animals.

Protesters were filmed taking dead animals from the farm and cradling them near the entrance, while others took living ducks to sanctuaries.

In slaughterhouse demonstrations, protesters often chain themselves to machinery to prevent operation – a tactic used at Petaluma by one group of DxE activists.

A video sent to Totally Vegan Buzz by DxE shows that as a group are chained to metal bars, the machine suddenly turns on and drags the group around in a circle.

And one protester’s head gets jammed between a pole and the padlock attaching his head to the machine.

As the group begins to panic, an activist screams: “We need to stop this right now.”

The machine was thankfully turned off just in time, and activist Thomas Chiang was freed after a fellow protester released his lock.

The unfortunate activist told ABC7 News the incident ‘almost decapitated my head from my neck’.

“I was feeling my life leave my body, as I was struggling to get out of that lock,” he explained.

Signs around the farm are marked ‘Keep Out, Biosecure Area’ meaning the activists entered at their own risk.

The Sonoma County Sheriffs Office said the incident was an accident and that an employee turned the machine on without realising protesters were attached to it.

Chaing was rushed to hospital but told ABC his injuries will heal. He’s unsure if he will file a police report.