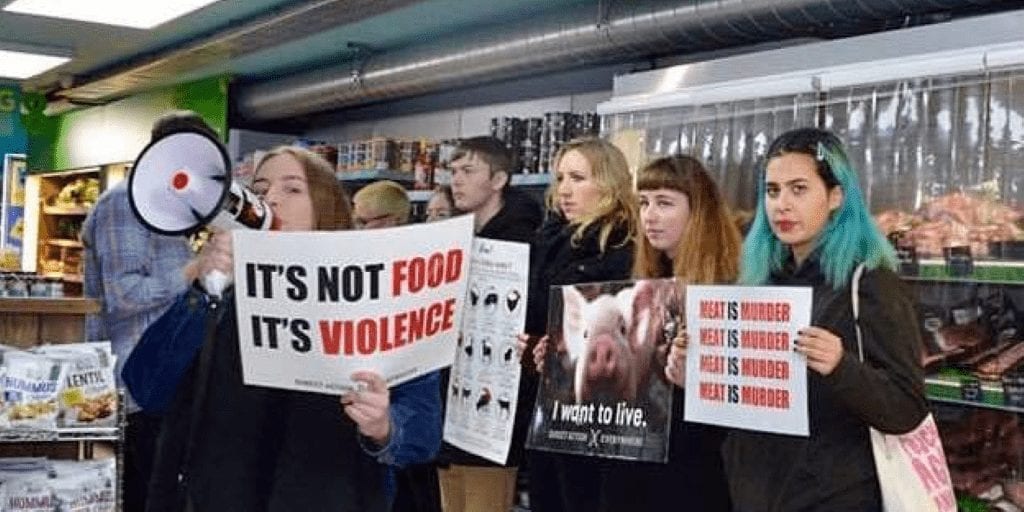 Animal rights activists protested at a self-proclaimed ‘ethical’ supermarket, using megaphones to tell customers that ‘humane slaughter does not exist’.

Direct Action Everywhere staged the disruption at Hisbe in Brighton, UK – a supermarket which claims it aims to ‘respect customers, farmers, suppliers, ANIMALS and the PLANET’.

Thirty activists entered the store holding signs with messages that ‘humane murder is a lie’ and ‘local doesn’t mean ethical’.

Customers stopped to listen as the group said over megaphones: “Don’t be gullible! These farms aren’t ethical. They are places where animals are bred to be profited from and murdered.

“There is no right way to do the wrong thing. This whole “happy” exploitation movement are not baby steps,” activists said.

“They are big steps–in a seriously backward direction. Humane slaughter does not exist.”

On its website Hisbe describes factory farming as a ‘shameful embarrassment’.

“We prefer to source from local farms committed to traditional farming practices where high-welfare animals are treated with care and respect. Cows are put out to pasture, sheep and chickens roam free, and pigs play in mud – exactly where they want to be,” it states.

Direct Action everywhere argued that Hisbe claims to respect animals while profiting from their exploitation and death.

A spokesperson said: “Selling so called “ethical” meat, the hypocrisy and disconnect runs deep in this business. The owners have refused to go to the slaughterhouse where these animals are murdered and bear witness to the animals being killed in what they claim are ‘humane’ ways.”

During the protests activists stood in the meat, dairy and egg sections and described the horrors of the industries.

“Dairy cows are forcibly impregnated and then have their babies stolen,” one demonstrator said, beside an activist holding a sign reading ‘you are not a baby cow’.

Messages were displayed in the meat section such as: “Attention: animals’ lives are their right. Killing them is violent and unjust, no matter how it’s done.”

Activists left the store in their own time while chanting ‘Humane slaughter is a lie. Animals do not want to die’.

DxE told Totally Vegan Buzz in a statement: “There is nothing ethical about farming and killing animals, there’s no such thing as ‘happy’ meat, milk or eggs.

“Consumers control demand, we have responsibility as individuals. We have the responsibility to be conscious consumers and hold our businesses accountable. Regardless of how you do it using animals in order to profit from their bodies is wrong.

“Their lives are their own. Animals are not products and using them for our greed and appetite is unethical and irresponsible.

“Diet has an astronomical effect on the environment and most importantly the animals being exploited.

“Not eating animals and animal ‘products’ is the single biggest way to reduce your impact on Earth. There’s so much corruption in this world but we the people have the power and responsibility and we need to acknowledge and use it compassionately and productively.

“Let’s not buy into more false advertising. Animals do not want to be slaughtered. There’s nothing ethical or humane about what we do to them.

“There’s no way to kindly exploit or kill them. Animal liberation is how it should be.”

Following the protest, Hisbe posted the following response on Facebook:

We had a second visit from some local vegan activists at the weekend. This time we allowed them into the store as they assured us the demo would be short and peaceful. However we won’t be doing that again because they were shouting through megaphones indoors – they were very loud and obstructive and some of our staff and customers felt intimidated.

Anyway, the events raise an interesting clash in ideologies…

On one hand you have HISBE Food, a social enterprise committed to enabling mainstream supermarket shoppers to buy good quality, real food, locally sourced and seasonal. This includes produce that supports high animal welfare, natural farming, reduced waste and plastic, paying what’s fair and doing business beyond profits. We passionately oppose factory farming and encourage people to consume less, better quality meat. We are committed to ethics-led sourcing and, to us, this means we sell local and high-welfare meat, eggs and dairy products.

On the other hand you have these vegan activists, who think that it is morally wrong for HISBE to sell animal products, full stop.

To the vegan activists, slaughtering an animal for food is the same as murdering a person. It’s irrelevant to them how the animal lived its life if that life is ended prematurely (we thoroughly disagree with this because of the vast difference between the living conditions on factory farms vs small high-welfare farms like ours). The vegan activists believe animals are victims of mass oppression and that veganism is more than a personal dietary choice; it’s a liberation movement tackling a social injustice. They want to free all animals and they hold these demos to educate the public to go vegan.

And so you have two very different sets of food ethics!

We believe everyone has the right to demonstrate, although we do get frustrated that the vegan activists misrepresent HISBE. Despite repeated clarification from us they continue to make statements about us, our business, our sourcing and how we describe our animal products that are completely false.

No, we don’t agree with these vegan activists’ opinions or their methods, but we do support the choices of our many vegan friends and customers. HISBE serves people of every different food persuasion and we believe in everyone’s right to choose. We invite everyone to consider different ideologies, talk about the food issues that matter to you and make conscious choices about what you eat.

Finally, thank you to all our customers who know what we do and have supported us through these protests, meat-eaters, veggies and vegans alike.

Anyway, we gotta go – we’ve got a shop to run! We’re trying to transform the food industry here ?