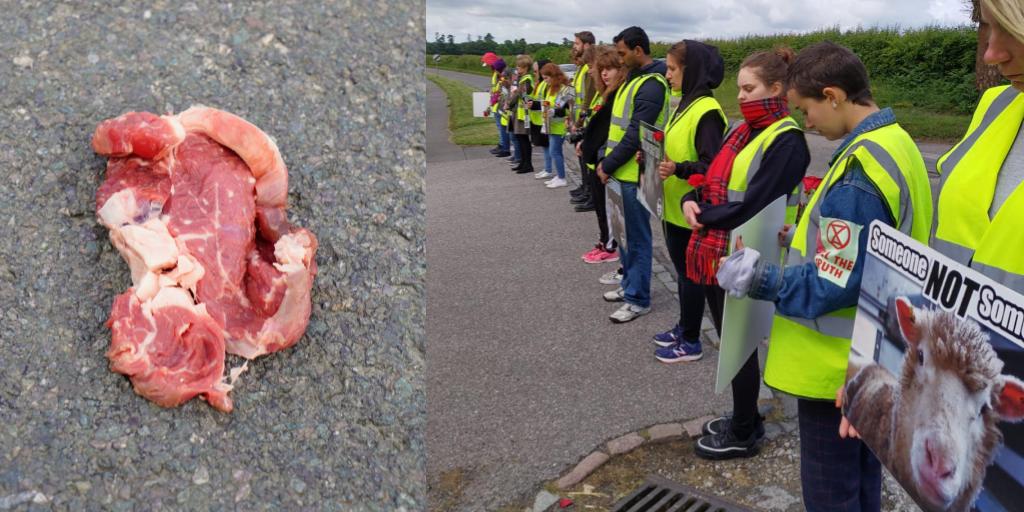 Campaigners were mourning the death of slaughterhouse animals

Abusive meat eaters threw a piece of raw cow’s flesh at a group of peaceful vegans who were mourning the death of slaughterhouse animals.

Members of Sussex Animal Save (SAS) were holding a monthly demonstration near Tottingworth Farm, Sussex, UK when a car drove past and a passenger flung the cow’s meat at the vegans.

SAS told Totally Vegan Buzz that the action shows ‘the absolute lack of respect for the life of someone else’.

“This was once part of a living being who spent their short existence as a commodity, only to end up as a ‘piece of meat’,” the spokesman said.

The group believe the incident was performed by a member of the public in ‘an attempt to antagonise vegans, who were holding a peaceful vigil outside a slaughterhouse for the animals’.

Sussex Animal Save shares details of the events on social media with the hope that ‘others can make the connection between not what they’re eating but who they’re eating’.

Tottingworth farm was recently forced to close its pig slaughterhouse due to relentless activism and falling demand.

But it turns out the activists were only part of the problem, as dwindling demand at the venue made the farm’s business model unmanageable.

A spokesperson for the farm said: “It is not just because of vegan protestors – who have been coming for a while – but pig numbers have gone down considerably over the years.

“We used to do more than 150 pigs a week but this last week it was only 58. It is not financially viable.”

A farmer in the area who used the slaughterhouse, who did not want to be named, told agriculture magazine Farmers Guardian that local farmers had ‘nowhere to go’ and that it would be ‘very hard to start a new abattoir in the south east’.

“I would say it is right that it is not just protesters. It is a complicated issue but farmers are very nervous about losing vital infrastructure,” he revealed.

“They have had a great deal of trouble for years from protesters and people will see this as a consequence of the intimidation.”