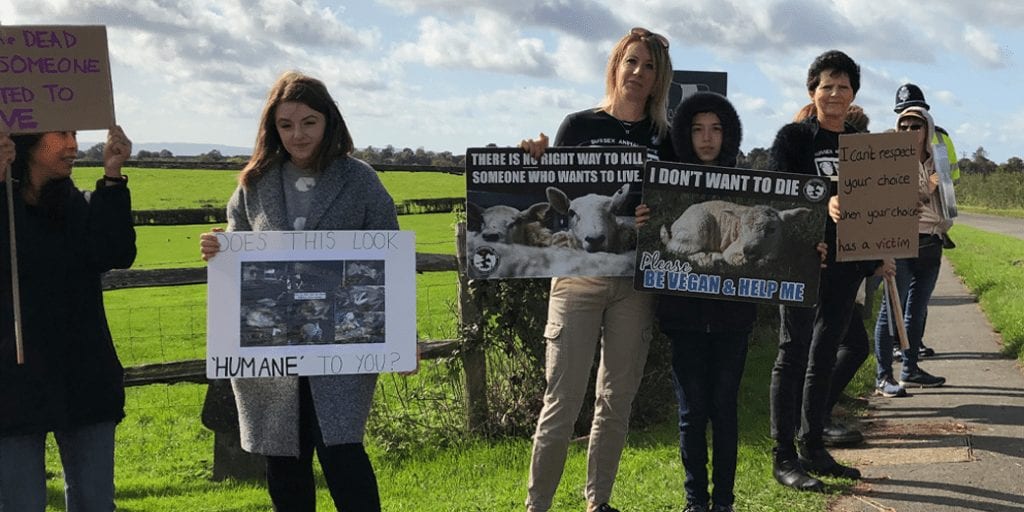 A group of animal rights activists in Sussex, UK are relentless in their protests against animal abuse and slaughter.

Sussex Animal Save has been visiting the same farm every month for two years to expose the reality of the meat industry, holding signs and handing out leaflets to members of the public and visitors to the farm.

The group is a chapter of the Save Movement, a global organisation of activists who bear witness to animals going to slaughter.

The tireless work has seen success. Earlier this year Tottingworth slaughterhouse stopped slaughtering pigs due to their activism and falling demand for pig meat in the area.

But Sussex Animal Save aren’t done yet, and the victory has fuelled the activists to try to end slaughter at the farm altogether.

The group fights for silenced animals, and announced in a statement: “Let’s come together and insist that these individuals deserve the moral rights of life, liberty and freedom from slavery. And that they shall no longer be exploited and killed for ‘food’!”.

The group say they will not stop protesting until every slaughterhouse is closed.

A spokeswoman told Totally Vegan Buzz: “We come here every month and stand outside the slaughterhouse, asking the truck drivers to stop so we can say goodbye to the animals and so that their plight and the individuals they are do not go unnoticed.

“We take photos of them to share on social media to help others make the connection between the food they eat and the individuals who have to lose their life. Many people have stopped paying for animal products after seeing our photos.

“We are aware that this is a high welfare slaughterhouse however this is part of the issue. There is no humane way to exploit and kill animals and it is harmful to tell people there is.

“Although many of the animals are looked after well, we see the fear in their eyes and many of them cry and cuddle up to one another. We watch them being forced out of the truck into the slaughterhouse and they always put up a fight.

“Over the years, we have seen different animals grazing out in the fields, which adds to the idyllic family farm image. However, we know all these animals have been killed and probably very young. The slaughter age for sheep is 6 months.”

In January, the activists released images of a pig who was covered in blood from an injury in a truck on its way to slaughter. They also reported witnessing ‘large lorries of pigs covered in scratches from fights caused by stress’.

What do you think of this form of activism? Share your thoughts in the comments section below!