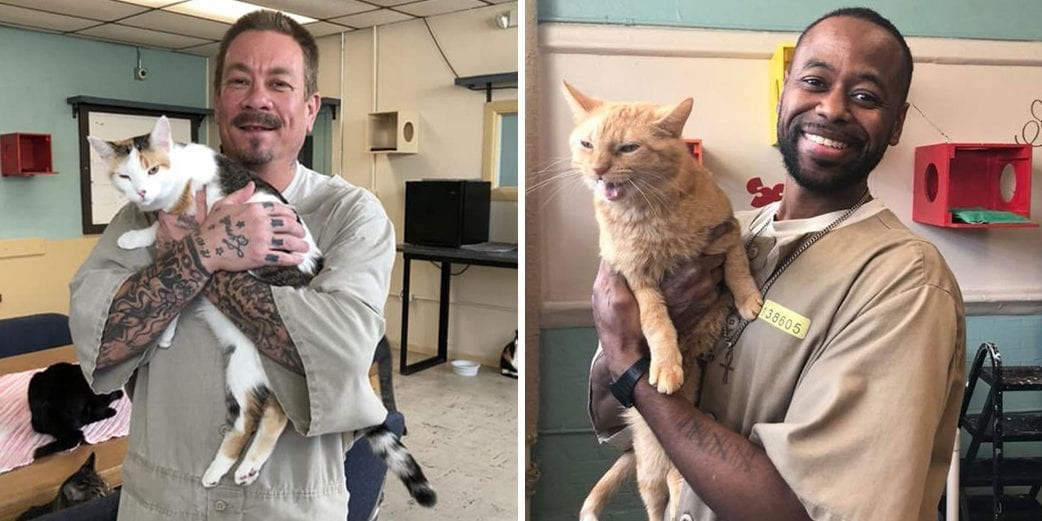 Prisoners of a correctional facility have the perfect way to reduce their stress and rehabilitate – by tending to abused rescue cats.

In 2015, the Pendleton Correctional Facility at Indiana collaborated with the Animal Protection League (APL) to initiate a program called F.O.R.W.A.R.D. (Felines and Offenders Rehabilitation with Affection, Reformation and Dedication).

Under the program, prisoners at the facility are allowed to tend to a dozen abandoned cats.

Most of the shelter cats are confined, exploited and mistreated, which in turn makes them hostile towards humans.

To help the cats bond with humans, the prisoners feed, groom and clean after them. This makes the cats more social and trusting towards humans, which in turn increases their chances of being adopted.

Barry Matlock, an inmate at the facility told The Anderson Herald Bulletin: “It’s kind of ironic that these cats had to come to prison to have some freedom,”

However, the program has not only helped the cats but has also proved beneficial to the inmates. Prisoners said they became more compassionate and responsible.

The APL website explains the program highlights: “(The program) teaches them responsibility, how to interact in a group using non-violent methods to solve problems and gives them the unconditional love of a pet – something many of these inmates have never known.”

Speaking to WISH-TV, Lamar Hal, a prisoner said: “I always look forward to coming here for those nine hours.

“It takes a lot of stress away. It keeps my mind on good things, positive things, rather than just sitting in a cell for the majority of the time . . . Love will change characteristics from anybody’s tortured past. That goes for animals and humans, really.”

Pleased with the success of the program, Maleah Stringer, director of the Animal Protection League said: “I’ve had offenders tell me when they got an animal, it was the first time they can remember they were allowing themselves to care about something, to love something. That’s a pretty powerful statement.”

What do you think of the F.O.R.W.A.R.D. program? Share your thoughts in the comments section below!