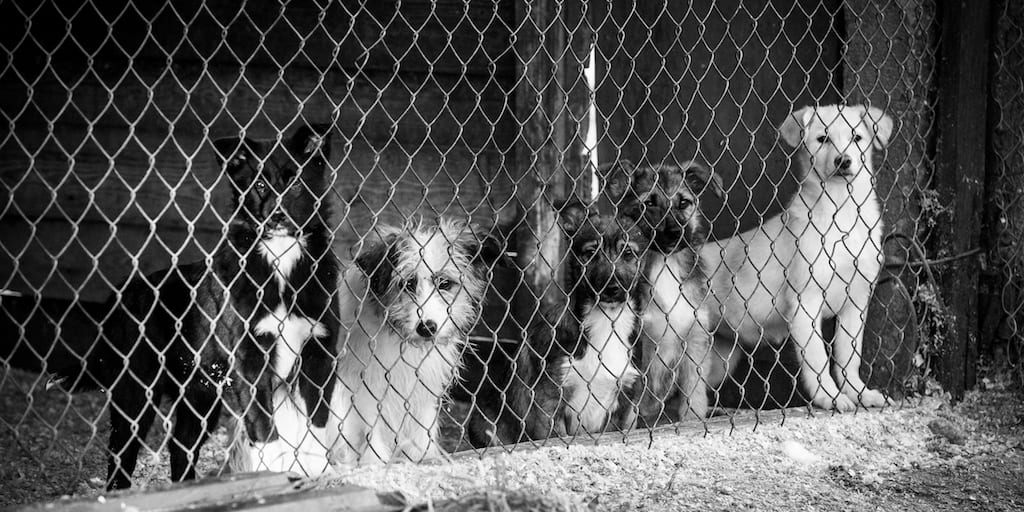 An activist network has successfully blown the lid off an illegal slaughterhouse that imprisoned hundreds of dogs for illicit meat trade.

Even as the Chinese Ministry of Agriculture and Rural Affairs released a draft policy to ban dog meat trade last week, activists rescued hundreds of dogs that were on their way to become meat.

The rescue operation took place after police received a tip-off from animal activists and distraught pet owners in search of their pets.

A total of 423 dogs, most of them believed to be stolen pets were rescued from an illegal underground slaughterhouse in Henan

The rescue team included Vshine- a non-profit charity working on animal protection, animal welfare, and environmental education along with its partner groups in Henan and Zhengzhou Animal Protection Association

The team found the animals wounded, terrified and crammed in filthy cages and after rescuing them drove 25 of the sickest dogs to an animal shelter owned by HSI and Vshine for treatment.

“This is such a typical story in China, bereft pet parents searching for their lost dogs, animal activist and netizens mobilising to help, and a nightmarish dog slaughterhouse being uncovered in the process,” an HSI spokesperson told MailOnline.

“It’s too early to say if any of the rescued dogs will turn out to be the missing pets being searched for, but the majority of the dogs saved will have once been someone’s companion,” she added.

China banned all trade and consumption of wild animals in February in the wake of the coronavirus outbreak that has been reportedly linked to a wet market in Wuhan that sells live and dead animals for food and for other purposes.

According to the new regulation likely to take effect on May 1, all restaurants, hotels and farms will be prohibited from selling exotic meat and offenders will be fined up to 20 times the value of the meat.

The legislation on eating cats and dogs is part of a wider crackdown to stop the trading of wild animals in Zhuhai to ensure food safety in response to the current crisis.

Despite government measures, the undercover rescue operation highlights the underbelly of the meat industry that is still running the illegal meat trade racket involving wild animals as well as dogs and cats.

Experts, scientists and many of the general public have been urging the government to enforce stricter measures against the trade and consumption of exotic meat.

Activists have also called on the government to ban the Yulin dog meat festival where thousands of innocent dogs and cats are tortured, burned alive, boiled alive, crammed into dirty overcrowded cages then cooked and eaten.

The gruesome festival happens every year on the summer solstice killing nearly 10,000 dogs in the name of food.

A user named Angelica Langridge has launched an online “Let’s put a final stop to the Yulin dog eating festival forever!” petition on Change.org petition which has already received 110,854 signatures.

Share this news to reveal the exploitation of the meat industry on animals.