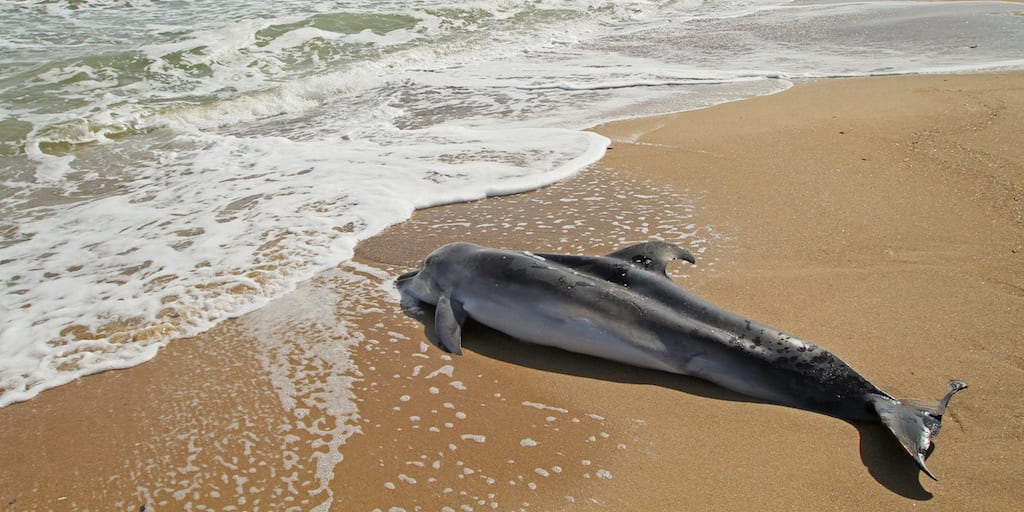 Harrowing pictures have emerged of two dead dolphins with gaping gunshot-like wounds who were found in Florida, US.

A $54,000 reward has been offered for any information which reveals what happened to the dolphins near Naples off Florida’s Gulf Coast and catch their killers.

The National Oceanic and Atmospheric Administration (NOAA) has offered $20,000 which will be added to $34,000 offered by animal welfare groups.

Sickening pictures from the Florida Fish and Wildlife Conservation Commission reveal the injuries which caused the death of two dolphins.

One has a large hole in its nose, while another shows a dolphin washed up on a beach near Naples.

Biologists from the NOAA said the dolphin with an injury to their head had been killed by a bullet or sharp object. In the same week another was found dead with a bullet in its side on Pensacola Beach in the Florida Panhandle by Emerald Coast Wildlife Refuge.

Official statistics reveal that 29 dolphins have been killed and washed up on Florida beaches with wounds consistent with gunshots or arrow punctures.

Authorities have urged people not to feed dolphins as this can encourage them to expose themselves to vulnerable situations.

Stacey Horstman, a bottlenose dolphin conservation coordinator at NOAA, said in a statement: “When dolphins are fed, their behavior changes. They lose their natural wariness of people and boats.

“The best advice is not to feed them, not to reach out to them. The seemingly innocent act of feeding dolphins can lead to harm and something like this.

“This area of southwest Florida and in the panhandle are hot spots for illegal dolphin feedings.”

Last year another dolphin was found dead off Captiva Island with a puncture wound in its head.

Animal rights groups offered $11,500 for any information leading to a conviction of the perpetrator, but the investigation is still ongoing.

Share this article to reveal the dangers associated with feeding wild marine mammals, and help appeal for information about the death of two dolphins in Florida.