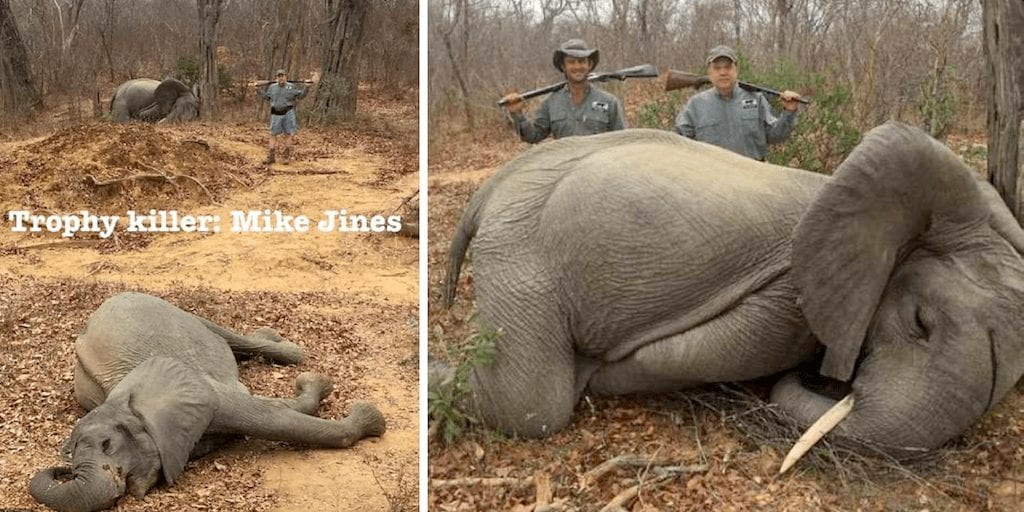 A rich businessman has been slammed by animal rights activists after killing two baby elephants and posing beside their corpses.

Mike Jines, from Georgia, US, shot two elephants believed to be babies in 2018 in Zimbabwe, and has faced intense criticism since pictures of the hunt surfaced on social media.

The hunter is seen posing holding a gun standing over the elephant bodies alongside a professional hunter.

Despite the disturbing photo evidence, the hunter claimed the elephants were not babies and he acted in self defence.

“The two (elephants) that are shown in the photos were shot in self-defense, in an unprovoked charge and both elephants were fully mature cows, not juveniles,” he told CBS 46.

He also said he had received death threats since the pictures were shared widely on social media.

Jines is a US energy executive, and said his company had been fighting to deal with the backlash by telling people ‘actual facts as opposed to the mischaracterization of the information on social media’.

The photos were uploaded by Darrell Eisman on Facebook.

“Apologies for the disturbing photo. If you’re really upset by what you see, than make this go viral along with an email letting Mike Jines know what you think,” he wrote.

Elephant numbers have been in drastic decline in recent decades. The African bush elephant is officially lifted as endangered, but in 2017 the Trump administration lifted a ban on importing elephant trophies from Zimbabwe and Zambia, much to the horror of animal rights activists.

“What an innocent, sweet animal. Elephants are known to be extremely social animals living in a pack. Not only is this unforgivable but the trauma it caused the tribe makes me believe those idiots should face that poor baby’s tribe without guns,” one Facebook use wrote in response to the hunt.

What can be done to stop hunters from killing endangered species? Share your thoughts in the comments section below!