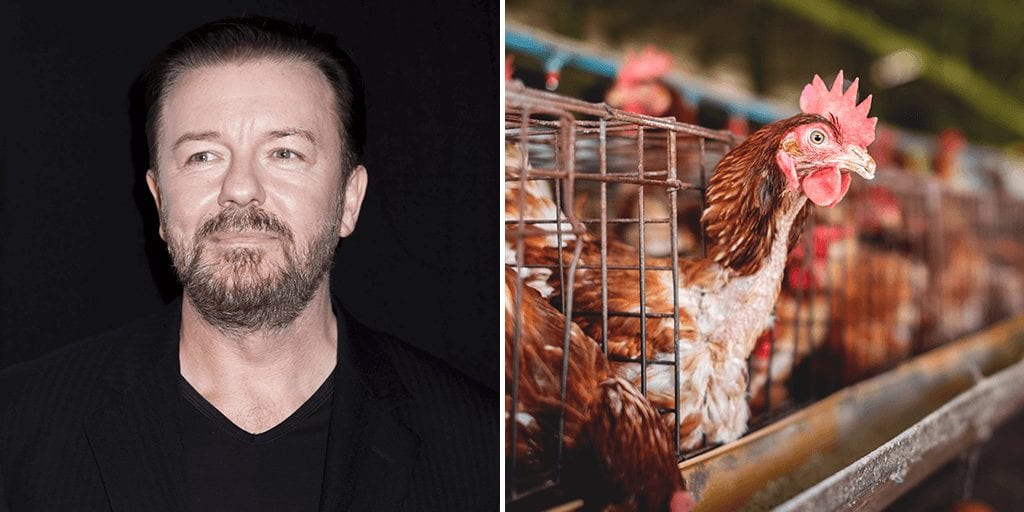 Ricky Gervais has once again stood up for animal welfare as he backs a campaign calling on the UK government to ban factory farming.

According to animal activist and actor Ricky Gervais “factory farming condemns animals to a lifetime of suffering. It’s cruel, inhumane and doesn’t belong in this century.”

His comment comes in support of the campaign launched by vegan charity Viva!, which is calling on the UK government to ban factory farming.

In an open letter to prime minister Boris Johnson, the animal protection group points out the negative impact of factory farming, not just on animal welfare but also the climate emergency and human health.

Referencing scientific data, which estimates that three out of every four new or emerging infectious diseases in people come from animals, the charity states that wildlife trade and factory farming account for nearly three million deaths a year since the animal industry presents the perfect ground for diseases with its unhygienic, deplorable, intensive, and horrific systems of dealing with animals.

“Across the globe animals are kept in horrific conditions in factory farms and wildlife markets. These settings provide a fertile environment for the transmission of viruses between different species,” the group states in the letter.

The charity also highlights that meat and dairy production account for 60 percent of agriculture’s greenhouse gas emissions based on study results led by Joseph Poore at the University of Oxford.

Addressed to the Secretary of State for Environment, Food and Rural Affairs,  the campaign states that 70 percent of all farmed animals in the UK are raised in environments dangerously  similar to the conditions in wet markets and “ to slow the spread of new diseases, we need to change the way we look at animal farming.”

“Intensive farming is a danger to people and animals alike. That’s why, together with public health experts, we urge you to take protective action – by introducing a ban on factory farming in the UK,” the campaign states in its petition.

The ban factory farm campaign has reached 50% of its goal and is urging people to back the petition. You can support the campaign here.

To support Viva!, you can sign the open letter to the UK prime minister here to urge him to: “Support and encourage plant-based food initiatives to transition our food system and eradicate our reliance on unsustainable animal agriculture and end factory farming by addressing the unequivocal links between the intensification of animal agriculture, global pandemics and the climate emergency.”

Share this story to support the petitions calling for a ban on factory farming.