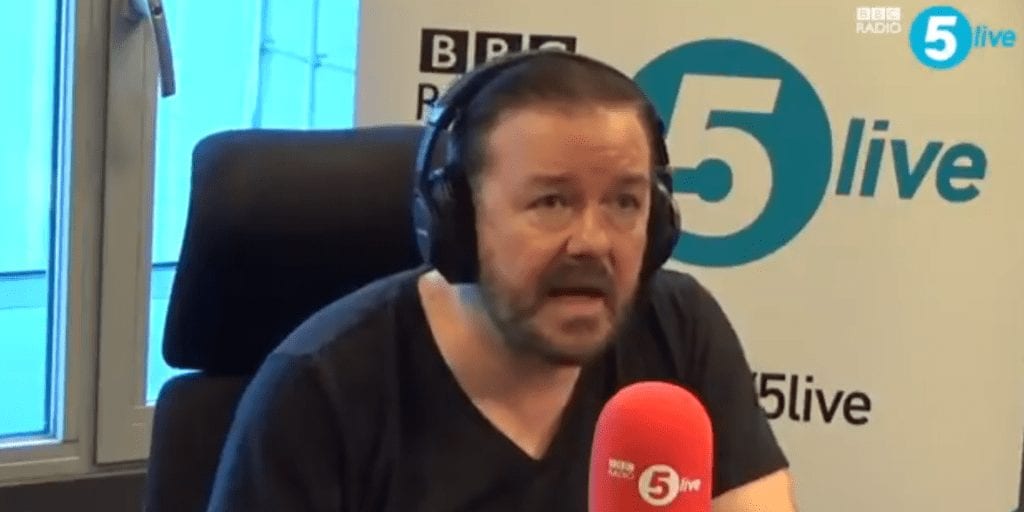 Gervais, who has been an outspoken animal rights activist for many years and is rumoured to be vegan, was speaking to Radio 5 Live and called for the banning of animal testing in any form.

“It doesn’t work – 93 percent of all experiments that work on animals then fail and are dangerous to humans, because the models don’t work. Computer models work better than animal testing,” he said.

“It’s propaganda because people who breed beagles make £1,000 or £2,000 per dog, universities get kickbacks from pharma companies to do research… it doesn’t work and it’s cruel. You’ve got to end animal testing.

“Some people think, ‘Oh yeah, but what about cancer and AIDS?’ I understand that but there’s no ambiguity about shampoo and cosmetics. That’s mental – putting stuff in rabbits’ eyes and torturing them to death. Don’t get shampoo in your eyes, it stings, done.”

Gervais’ rant is backed up by figures provided by animal rights group PETA, which claims that 95 percent of tests on animals fail for humans as they are too dangerous.

The group states: “A survey of 4,451 experimental cancer drugs developed between 2003 and 2011 found that more than 93 percent failed after entering the first phase of human clinical trials, even though all had been tested successfully on animals.”

Though he has never fully confirmed himself as vegan, but has spoken in the past about abstaining from meat and dairy.

What do you think about Ricky Gervais’ rant? Tell us in the comments section below!