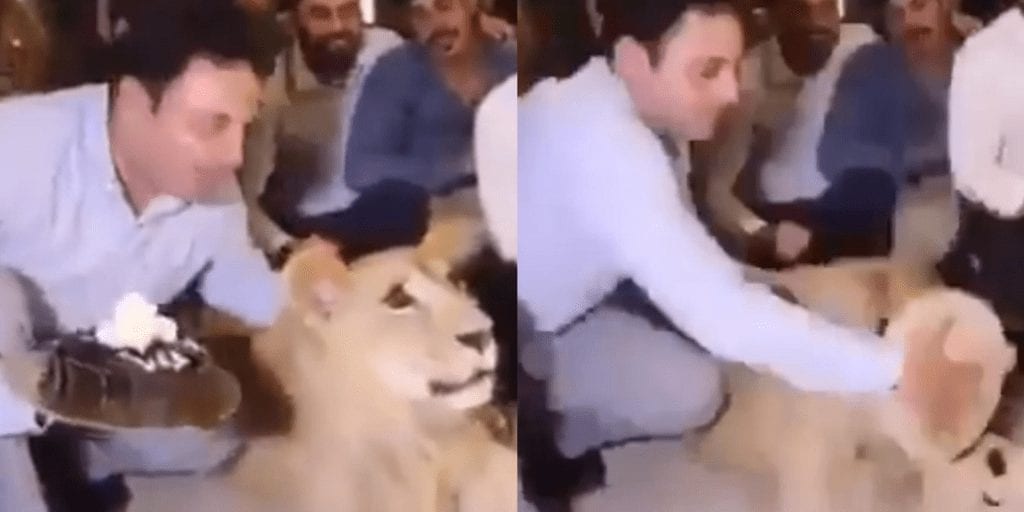 ‘Dirty, worthless filth’ – this was the description British comedian Ricky Gervais gave to a group of men who were filmed smashing a birthday cake into a lion’s head.

The video surfaced on Twitter of a group of men who taunt a lion by sitting around the animal, before one of them slams the dessert onto its head as the onlookers cackle with laughter.

The lion paws at its face, clearly in distress, but the men continue to laugh in hysterics at the prank.

The post was originally uploaded by biologist and animal rights activist Daniel Schneider.

“Each and every person in this video needs to have cake thrown in their face, every hour on the hour, for the rest of their lives. Why is it so hard to be kind to animals?” he wrote.

The video has been shared thousands of times, and Gervais led the outcry against the men’s behaviour.

Schneider added to his post by dubbing the men ‘human garbage’

“How much abuse has this lion been exposed to in order for it to not act on instinct and maul the entire lot? I’ve lost all faith in the human race,” another viewer wrote.

“The absolute disgusting ignorance, and cruelty of man to take advantage of another being’s innocence and vulnerability is the ultimate sign of weakness – these men make be sick. I bet the animals claws were removed as well. If I was there, they’d not be laughing,” one person Tweeted.

Another wrote: “That’s an awful waste of cakes, lets just punch them in the head until their faces collapse, OR how about make them do it to an ADULT lion at feed time.”

Ricky Gervais is a rumoured vegan and outspoken animal rights activist. Earlier this year he launched into an explosive rant to condemn the use of animal testing.

And he later mocked meat eaters for their angry reaction to the Greggs vegan sausage roll in a hilarious interview.

What do you think if this video? Share your thoughts in the comments below!