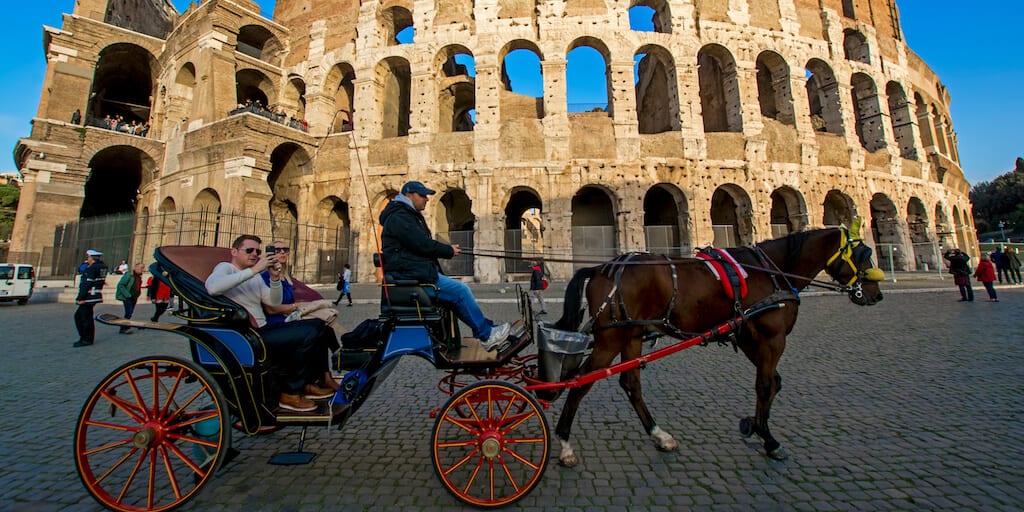 Mayor Virginia Raggi posted: “We have expressly forbidden it.”

The open-topped carriages, known as botticelle, popular with tourists, can now only circulate in public parks and historic villas.

The move announced by Mayor Virginia Raggi, comes after years of debate over the well-being of animals that are exploited and tortured for commercial gains.

The horse-drawn carriages are a lucrative business with some tour operators charging more than 100 euros ($A164) per person for a tour of the city monuments.

“Carriages will no longer be able to circulate in the streets, in the traffic but only inside the historical parks,” Raggi wrote on Facebook.

“You will never again see tired horses on the streets of the city during the hottest hours of the summer months, because we have expressly forbidden it.”

As per the new rules approved by the city assembly on 1 December, horses must follow established routes, with mandatory stops every 45 minutes and must not be employed for more than seven hours a day.

The animals will also not be allowed to circulate from midday until 17.30 in the hottest months of the year, July and August.

Trade will never be the same

With the pandemic halting tourist inflow, carriage drivers, struggling to stay afloat, said Raggi’s move is a terrible blow to their livelihoods.

Despite the city offering botticelle drivers the option to switch to a taxi license, Angelo Sed, head of a carriage drivers’ association said: “Trade in the parks will never be the same as the sort of business you can do in the city centre.”

This isn’t the first time the mayor has announced measures to protect animal wellbeing. A similar move was announced by the city in July 2019 with Raggi stating at the time: “No more exhausted horses on the streets! Rome leader in safeguarding and protecting animals.”

The same news was also announced by the city in July 2018.

However, carriage drivers succeeded in blocking the measure by appealing in courts on the previous two occasions and are now reportedly preparing to challenge the latest move as well.

Share this story to let others know about Rome’s decision to ban horse-drawn carriages.