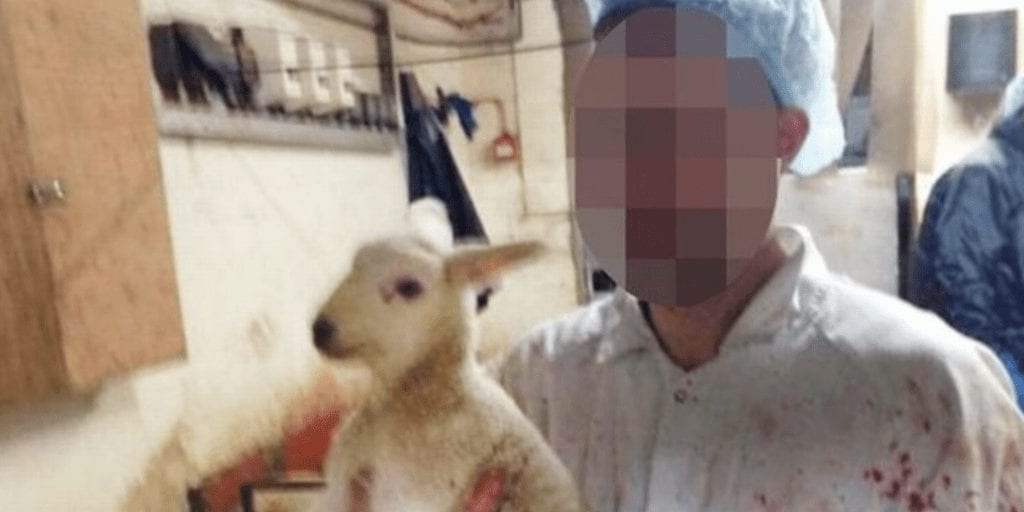 Warning: This article contains graphic imagery which some readers may find upsetting

Animal rights activists have exposed a sadistic slaughterhouse worker who posed with the severed ears of a lamb on his head.

Images show a blood-spattered man holding a baby lamb, and another with severed ears, which were originally accompanied with the caption ‘Baaaa’.

The horrific images were allegedly taken at an abattoir in Pak Mecca in Birmingham, according to West Midlands Animal Save.

The animal rights activists released the images with the caption: “We shared a public image of a local slaughterhouse worker.

“This worker contacted us and stated he was no longer a slaughter man, and that he had saved the lamb.

“Whether this is true or not is anyone’s guess and, unfortunately, it didn’t change the horror of the photos or his previous employment.

“The person in question is, thankfully, no longer in the industry and even took lambs to sanctuaries and attempted to rescue as many as he could.

“No, I don’t excuse his behaviour or how he behaved in the past, but let this be proof that anyone is capable of change.”

The manager of the slaughterhouse, named as Mr Gill, told the BirminghamLive that handling lambs at the business was necessary and said the building was regularly inspected to ensure trade regulations were met.

What do you think of the slaughterhouse worker’s actions? Share your thoughts in the comments below!