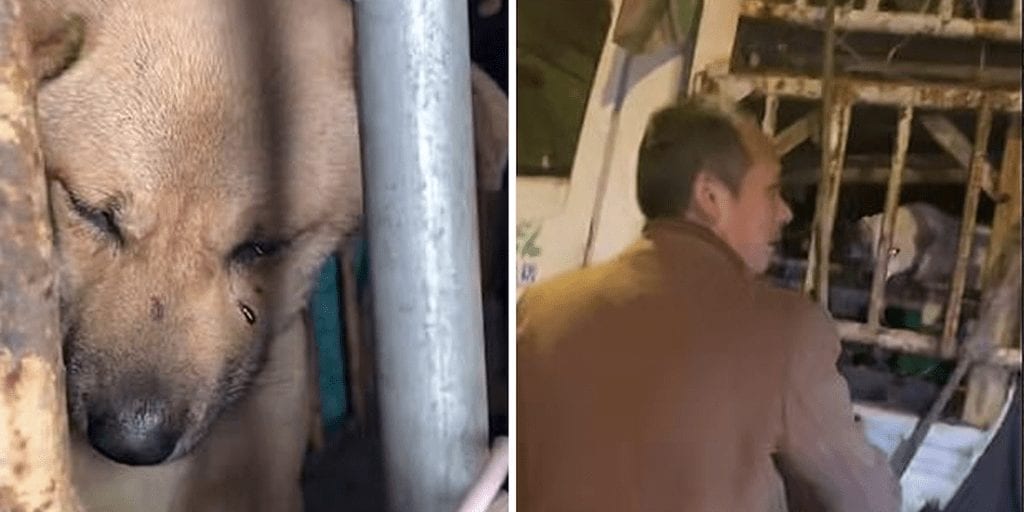 An animal sanctuary has revealed the horrific conditions dogs experience in the Chinese meat trade after rescuing a group of abused pups who were on their way to slaughter.

Activists intercepted a lorry carrying six dogs which had clearly been mistreated as they had signs of being brutally beaten.

One image even appears to show one of the animals crying ‘tears of blood’ due to abuse by dog traders.

Six dogs were being driven to an illegal slaughterhouse inside a tiny cage barely big enough to move.

Authorities in Sichuan believe the dogs may have once been family pets, but they had been stolen away and kept tied down by rusty chains.

Police and activists took the six dogs to an animal sanctuary. Du Yufeng, the founder of a protection centre, told the MailOnline: “They had been beaten by dog traders and had injuries all over their bodies.”

The founder of the centre revealed the harrowing footage in which a dog is constantly crying out in agony.

One dog is barely moving, and has blood droplets running down its face.

Authorities were alerted to the lorry by local animal lovers who were concerned for the welfare of the dogs.

According to Du, the driver claimed the dogs were his pets but eventually had to hand them over after he couldn’t explain where he obtained them from or where they were heading.

They will be relocated to Du’s Bo Ai Animal Protection Centre in Guangyuan.

She thanked activists for helping alert the police to the lorry, many of who were children.

“Thank you to all the volunteers who attended the rescue campaign and guarded the ‘children’ that were about to be sent to the slaughterhouse,” she added.

Du said that many dogs are stolen from homes in the area to prepare for slaughter at the Yulin festival.

Estimates suggest 10 million dogs are slaughtered for food in the Chinese meat industry every year.

What do you think of Du’s efforts? Share your thoughts in the comments section below!