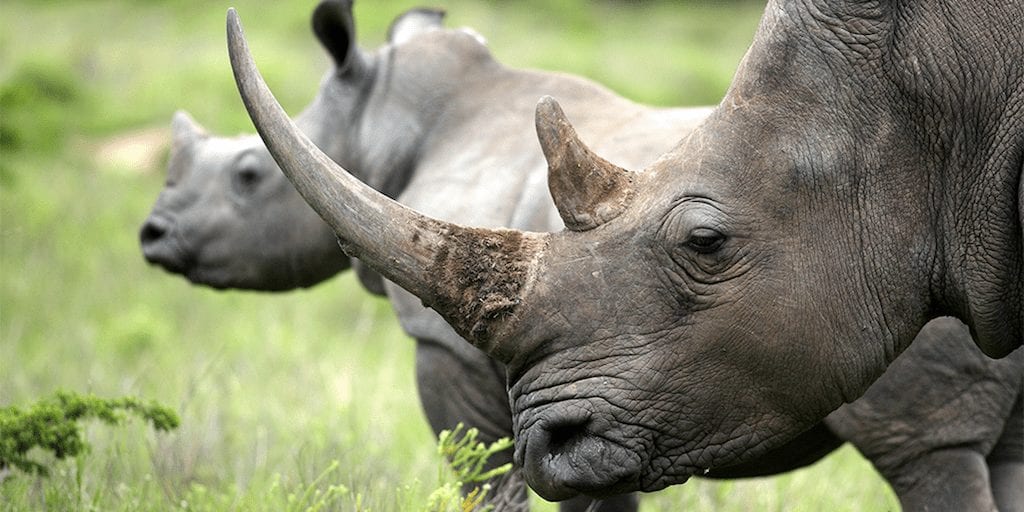 Scientists are attempting to disrupt the illegal rhino poaching industry by developing a cheap fake rhino horn to devalue the real thing.

Researchers hope that by flooding the rhino horn market with a cheap alternative which is very difficult to tell apart from the real thing, buyers and sellers will be confused by the product and demand for killing the endangered animals will fall.

Scientists at the University of Oxford and Fudan University in China have perfected a technique to make a fake rhino horn from horse hair.

Rhino populations around the world are in drastic decline, and many species are on the brink of extinction due largely to the poaching industry. This year Malaysia’s last male Sumatran rhino died.

Rhino horn can sell for $60,000 per kilo and trade is banned under EU laws, but the black market continues to thrive as the horns are believed to be a cure for cancer and other illnesses in China and Vietnam.

There’s little sign of a slow in demand around the world – it’s also known as an aphrodisiac in traditional Chinese medicine.

Researchers said the introduction of a fake would ‘confuse the trade’, as a flooding of the market would reduce financial rewards for poachers, smugglers and traders.

But some conservationists have warned about potential unintended consequences of the project.

Experts from Save the Rhino International have argued that adding more rhino horn – fake or not – could actually stimulate the market, filter more money to traders and increase demand.

A post shared by Save the Rhino International (@savetherhinointernational)

The group said more efforts should be put into anti-poaching methods and reducing existing consumer demand.

Rhino horns are made from tightly packed together hair which grows from the animal and is kept glued together through secretions.

The team of zoologists and molecular scientists worked out how to compress and mould horse hair – even mimicking the way a horn is cut from a rhino’s head.

“It appears from our investigation that it is rather easy as well as cheap to make a bio-inspired horn-like material that mimics the rhino’s extravagantly expensive tuft of nose hair,” said Prof Fritz Vollrath, from the University of Oxford’s Department of Zoology.

He also argued the scheme could “confuse the trade, depress prices and thus support rhino conservation”.

While the researchers may have good intentions, many feel the scheme is too risky. John Taylor, deputy director of Save the Rhino International, does not believe flooding the market will help the wellbeing of rhinos.

A post shared by Save the Rhino International (@savetherhinointernational)

He argues there will be unintended consequences of creating a more attractive product and increasing demand – even potentially increasing incentives for rhino poachers.

“There is no substitute for anti-poaching measures at one end and reducing demand at the other,” he said.

Rhino hunting is a controversial topic across the globe – from illegal poaching to legal hunting.

Earlier this year a trophy hunter applied to import a rare black rhino’s skin, skull and horns to the US after he paid $400,000 to kill the animal in Namibia.

It’s illegal under the Endangered Species Act to import trophies from endangered animals into the US unless it would help the survival of the species.

The hunter paid a wildlife conservation company to allow him to kill the animal in 2018 at the Mangetti National Park.

According to Namibia’s Ministry of Environment and Tourism, the rhino was interfering with the breeding of younger bulls and therefore damaging population numbers.

Only 5,500 critically endangered black rhinos remain living in the wild, half of which are in Namibia.

Kitty Block, the Humane Society’s president and chief executive, said: “With rhino poaching on the rise, now is the time to ensure that every living black rhino remains safe in the wild. Black rhinos must be off limits to trophy hunters.

“We urge our federal government to end this pay-to-slay scheme that delivers critically endangered rhino trophies to wealthy Americans while dealing a devastating blow to rhino conservation.”

What do you think of the trophy hunting industry? Share your thoughts in the comments section below!