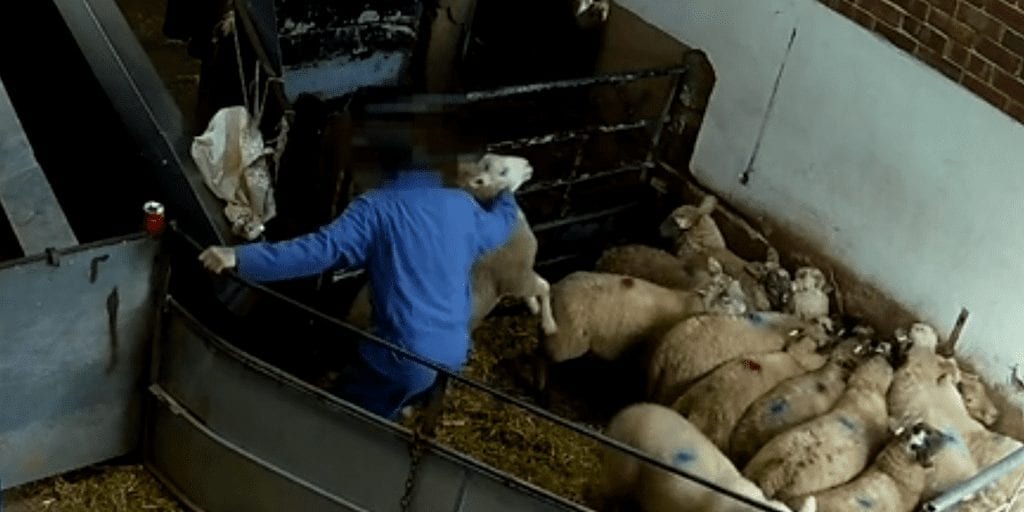 An investigation has been launched into a slaughterhouse after undercover footage exposed workers subjected sheep to horrific abuse.

Footage from Animal Aid shows sheep being hurled onto their backs, trampled on, improperly stunned, and one sheep gets its head stuck in a conveyor belt.

The Food Standards Agency (FSA) is looking into practices at Farmers Fresh abattoir in Wrexham, Wales thanks to the shocking footage obtained by activists.

Currently, it is a legal requirement to install CCTV footage in slaughterhouses in England and Wales to minimise risk of animal abuse

But Welsh authorities have so far refused to impose the measure, leading activists to use covert tactics to reveal the reality of slaughterhouses.

Animal Aid footage shows workers dragging terrified sheep across the floor by their legs and neck, and dumping them on a conveyor belt to be slaughtered.

Warning: The below footage contains graphic imagery which viewers may find upsetting

At the top of the conveyor, the cruel system involves workers jabbing repeatedly at the sheep’s head and legs with stunning prongs before their legs are attached to the next conveyor belt.

The lack of correct stunning means they remain conscious and will therefore be awake when their throats are slit.

Animal Aid’s Campaign Manager, Tor Bailey, said in a statement: “At this fast-paced killing factory, the issues were extensive and across the board.

“There were numerous failings by workers, but we believe that management and the slaughterhouse vet are hugely culpable too, in that they failed to prevent these shocking incidents from taking place.

“Without our covert cameras in place, this horrendous situation may have continued, unchecked, for some time.

“We’re calling upon the Welsh government to introduce independently monitored mandatory CCTV without delay across Wales.”

FSA has added staff at the site to monitor its animal welfare procedures, and has introduced additional welfare checks.

“We took swift action to increase our presence at Farmer Fresh in Wrexham and to introduce additional checks and ensure animal welfare was being protected,” a spokesman said.

“We take animal welfare at slaughterhouses very seriously and a criminal investigation is underway.”

FSA rated the slaughterhouse as ‘requires improvement’ at its latest inspection.

Farmers Fresh has not responded to a request for comment.