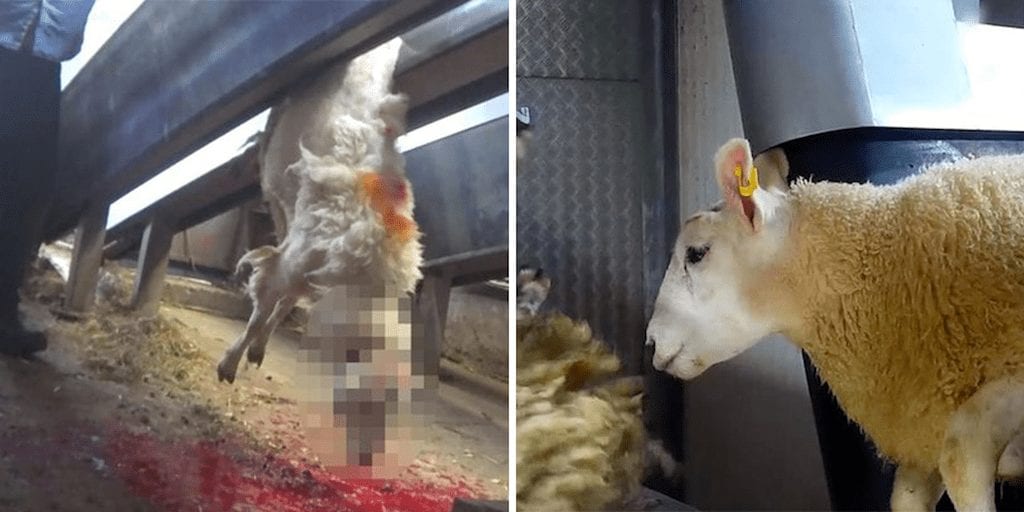 A slaughterhouse investigation has revealed harrowing footage of a sheep being beheaded in front of other animals.

The video filmed at Farmers Fresh abattoir in Wrexham reveals a disturbing scene in which a sheep is beheaded while hanging in the air.

Investigators from activist group Animal Equality also released footage of a live sheep on a conveyor belt trying to escape from underneath a pile of headless corpses.

The frantic scenes at the slaughterhouse, which was already under investigation for animal abuse, also include sheep being treated with contempt after being stuck in machinery.

On one occasion a worker is seen violently yanking a sheep out of the conveyor belt, and another sheep stuck in the system has its throat cut.

The live sheep are subjected to a haunting environment, as carcasses are seen strewn across the slaughterhouse floor.

Animal welfare group Animal Equality released the footage, which was filed by Animal Aid, at the Welsh slaughterhouse between July and August this year.

According to Animal Equality, a Food standards Agency inspector was present during the investigation.

“These defenceless animals are treated like commodities, placed on a conveyor that delivers them to their death,” Abigail Penny, executive director of Animal Equality UK, said in a statement.

“Slaughterhouses are inherently unforgiving places and this systematic neglect – made all the worse by poorly designed equipment – causes even more distress for these terrified lambs and sheep.

“We demand justice for these vulnerable animals.

“The Food Standards Agency must take immediate action against Farmers Fresh Wales and their own officer who failed in his duties. If people want to stop supporting the suffering that takes place in slaughterhouses, it has never been easier to choose plant-based options instead of meat.”

The group has lodged a complaint with the Food Standards Agency related to the footage.

A spokesman for the slaughterhouse told Mirror Online: “This was dealt with some months ago as soon as we were aware of it. The people were sacked straight away.”

Share this article to expose the truth behind the meat industry.