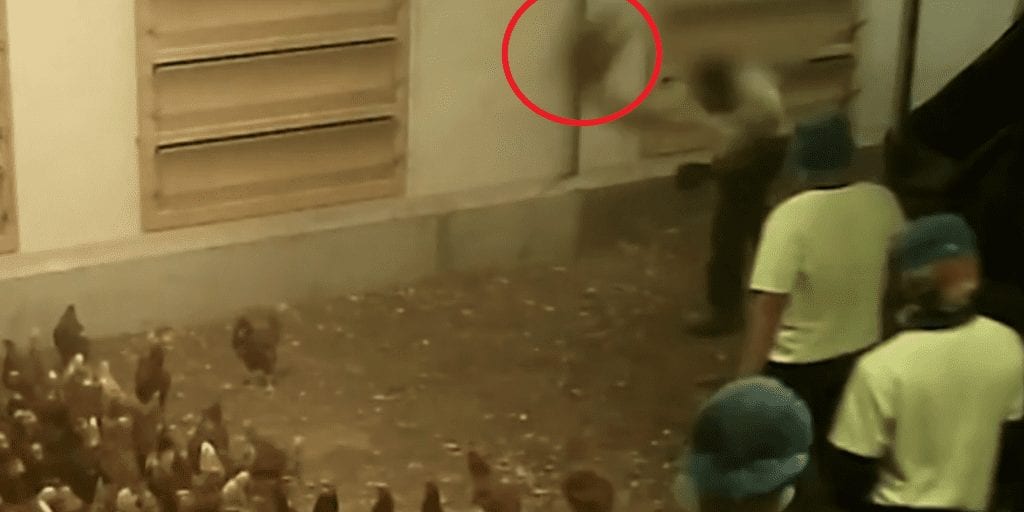 Animal rights activists from Animal Liberation revealed the footage, which is alleged to be at Victoria’s Bridgewater Poultry farm.

It shows sadistic workers grabbing hens and slamming them onto the concrete floor, and kicking them across the room.

The business provides some of the country’s biggest brands, including Loddon Valley Eggs, Victorian Fresh Eggs and Country Fresh Eggs. Until recently it also supplied Woolworths and Coles.

During the clip, one worker is heard saying ‘I hate it when their heads come off’, and another replies ‘yeah it feels good, look’.

And a twisted worker laughs as a colleague says ‘you’re cruel’ after his sick antics.

Birds are also see writhing on the floor in pain and being swept across the floor.

The footage was taken in April and May, and Woolworths and Coles said they stopped using the farm in March.

Bridgewater Poultry said in a statement it was ‘saddened and deeply appalled by the apparent conduct of employees’.

A spokesperson said it was not condoned, approved or permitted behaviour.

“Bridgewater Poultry Farm will work with the Victorian government and all relevant authorities over the coming days to identify any shortcomings in the treatment of stock and the reasons for them,”  the statement added.

“The overwhelming majority of farmers and people in the livestock industry care very deeply for their animals and when this type of footage emerges it undermines the good work that they do.”

Animal rights activist John Oberg told Totally Vegan Buzz: “Farm animals are born, bred, and raised in a system that allows for horrific abuse on every level, and this is evidence of that.

“Therefore, it’s up to each one of us to help these animals and the best way to do that is through our food choices, specifically by choosing plant-based over animal-based food.”

What do you think of this investigation? Share your thoughts in the comments below