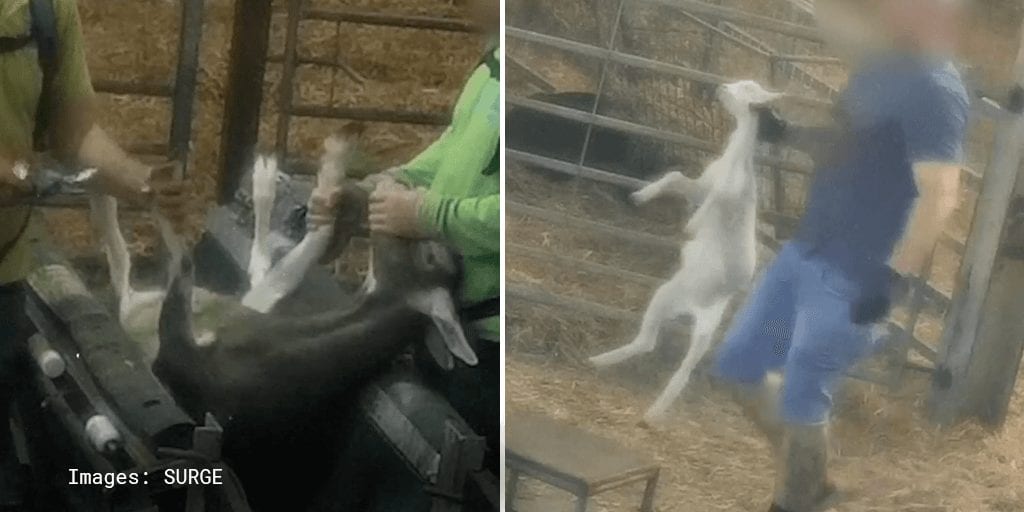 ‘Goats are sensitive, curious and gentle animals, but the animal-farming industries treat them as commodities they can exploit for profit’

In the undercover video shot at a farm that supplies St Helen’s Farm, in east Yorkshire, goats were seen being kicked, punched, hit with a pole and slammed onto their backs while some were crying in pain as they were pinned by their necks, with their ears tagged or tails twisted.

In the almost 60-minute-long video, some goats were seen struggling to stand or hobbling because of how they were treated.

One scene captured workers roughly trimming the goats’ hooves after they were cruelly slammed onto their backs on a conveyor belt. One of the goats was seen brutally dragged by one leg along the ground while it yelped and struggled.

The people behind the video also claimed they saw goats fall off the operating bed and get stuck between fences and in one case a callous worker was seen “playing the drums” on a fallen goat’s stomach.

Witnesses also reported that dead animals were dragged away in front of live ones and they saw many dead and dying animals littered around the farm.

The Independent reports that St Helen’s Farm established in 1986 is renowned for its goat milk, yoghurts, cheese and ice cream and its products are stocked by many major retailers across the UK.

However, Tesco, Sainsbury’s and Waitrose have reportedly cut off the supplier after seeing the footage.

“We require high animal-welfare standards from all brands sold at Tesco, so these claims are deeply concerning,” a Tesco spokesperson told the Independent:

“We have immediately suspended supply whilst we investigate the matter further,”

While the disturbing evidence was passed onto Surge, an animal rights group behind the investigation, a vet and lawyers at Advocates for Animals, on reviewing the footage said it “highlighted many serious issues”.

Commenting on the footage received, Ed Winters, the co-founder and director of Surge, said: “St Helen’s is the most prominent and well-known goat company in the UK. They are regarded as being the best of the best when it comes to goat farming. But that means nothing to the animals.

“Goats are sensitive, curious and gentle animals, but the animal-farming industries treat them as commodities they can exploit for profit.

“These animals are thrown around and dragged and when they’re no longer producing enough milk to be considered profitable, they’re killed.”

In response, St Helen’s Farm said in a statement it had suspended supplies from the farm while investigations were underway.

“The video shows a clear infringement of animal welfare standards that we would expect of all our suppliers and the footage is highly distressing and extremely concerning for us,” the statement declared.

“Animal welfare is of paramount importance to St Helen’s Farm and we are taking this matter extremely seriously.”

Share this story to let others know about the brutal abuse rampant in dairy farms.