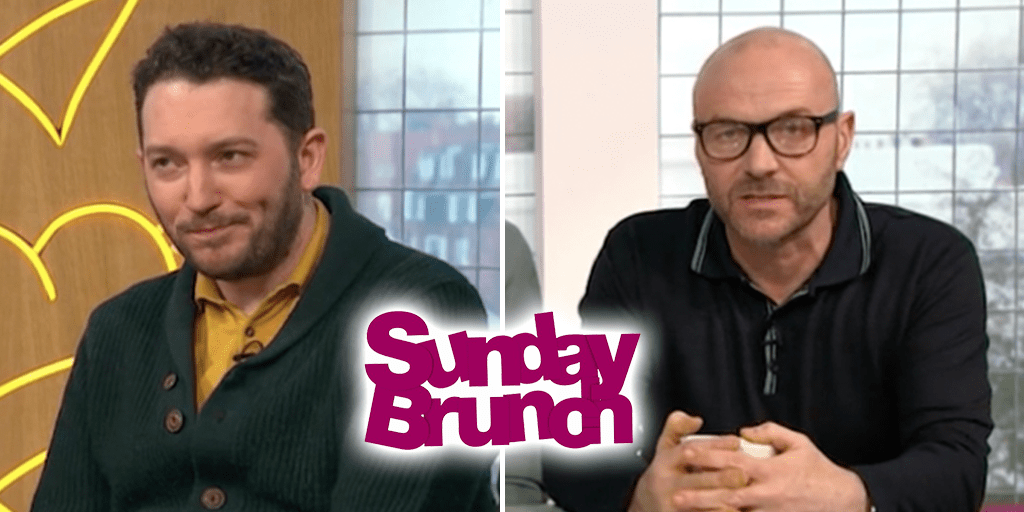 The Sunday Brunch host had asked Comedian Jon Richardson to taste the dhal saying it was vegan if the prawns were left out.

Vegan comedian Jon Richardson was a guest on The Sunday Brunch, a popular weekend cooking show that hosts celebrities and guest chefs to cook up different dishes.

Richardson was on the show with wife Lucy Beaumont to promote their new show, Meet the Richardsons.

During the show, chef Asma Khan cooked up a Masoor dhal curry with prawns for the guests and co-host Simon Rimmer served the 8 out of 10 Cats star a portion leaving the prawns out.

The 37-year-old actor ate a spoonful, as Rimmer assured the vegan actor the dish was vegan without the prawns although the chef had used ghee- a form of clarified butter obtained from cow’s milk.

On returning from a commercial break, the co-host, admitted his mistake and made amends to Richardson in a lighthearted apology.

“Earlier on in the previous cooking item, I may have informed guests that the dhal was in fact vegan,” said Rimmer.

“It was, of course, ghee used in the recipe, which isn’t vegan. I allowed Jon Richardson, who is indeed a vegan, to eat some of it.

“On behalf of myself and the Sunday Brunch team, I would like to sincerely apologise and hope I haven’t offended you and spoiled your life.”

Richardson was not too upset with the goof up and jokingly said: “When I’m sick during my interview, you can take responsibility for that.”

“It was delicious – and it could be vegan, there’s no reason why you couldn’t use a vegan spread in it,” he added to lighten the atmosphere.

But fellow vegans were not impressed with the slip and slammed the host and show on social media.

“This programme has done more to offend vegans this morning than Bernard Matthews has his whole life,” wrote a Twitter user.

“Seems like someone (or 3 people at least) need to learn the basics of where their food comes from. Do we need the “Vegan Food For Dummies” guide?! Utterly ridiculous #SundayBrunch More basic training required,” added another.

“Typical! #SundayBrunch ‘apologised’ for telling us ghee is vegan, shows we can’t trust how seriously you take us, courts have ruled in our favour so it’s about time you took notice!!” ranted a third.

Share this story if you’ve ever been tricked into eating animal products.