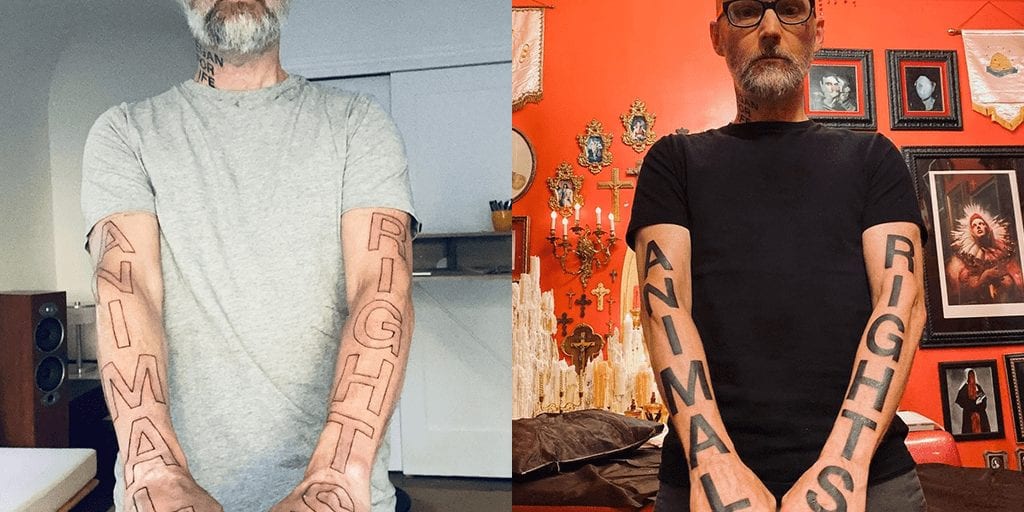 Vegan singer Moby has got his previously inked animal rights tattoo filled and adds another pro-vegan tattoo on his neck.

While the dawn of the new decade brings in new resolutions, promises and 366 empty pages to fill, Moby, the avid animal rights activist and singer wants to welcome 2020 differently.

The 54-year-old shared a picture with his 3,89,000 followers on his Instagram handle displaying his previously outlined huge ‘animal rights’ tattoo bolder and darker.

He had outlined the 12 letter tattoos down his arms in November to celebrate his 32nd vegan anniversary.

His other huge ‘VEGAN FOR LIFE’ tattoo drawn on his neck has company as the singer also had an inking on the back of his neck which reads: “Thou shalt not kill,” which he revealed in a separate post.

Alongside the picture, he wrote: “I got my first tattoo, a cross on my neck, in 1995 when I was on lollapalooza with sonic youth, beck, pavement, etc. After 24 years I thought it was time to ask @thekatvond to give it an update. Wouldn’t it be remarkable if the worlds religions agreed on this one simple edict; thou shalt not kill? Thou shalt not kill humans. Thou shalt not kill animals. Thou simply shalt not kill.”

Both his tattoos have managed to garner a lot of attention with fans applauding him and commending him on his dedication to animal welfare and veganism.

Even PETA couldn’t stop itself from praising the singer: “YESSS! ?? Looks great! Thank you for always being a LOUD advocate for #AnimalRights — no one can ignore this message ? So inspired to see what we accomplish together for animals in 2020 ???,” wrote the animal welfare organization.

“Man you are GREAT. Greetings from Honduras and Panamá,” commented a fan.

How influential can Moby’s activism be? Share your thoughts in the comments section below!